Zapatista bases of support ask: “Do you see yourselves as rebel scientists?”

In the ConSciences for Humanity Festival Zapatista bases of support ask: “Do you see yourselves as rebel scientists?” 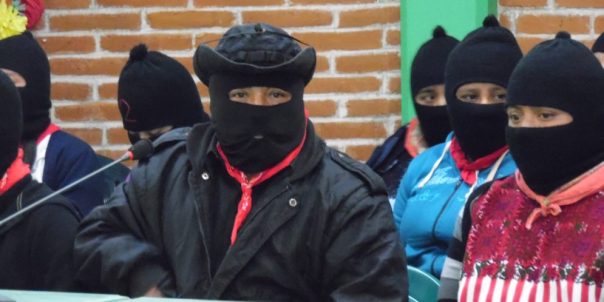 December 27, 2017 – With questions about how to construct a scientific practice for confronting the storm and the walls of capital, the second edition of the “ConSciences for Humanity” festival started this Wednesday with the theme “The sciences versus the wall,” in the CIDECI-UniTierra, of San Cristóbal de Las Casas, Chiapas, México. The EZLN’s Sixth Commission, headed by Subcomandante Insurgente Moisés, was in charge of the inauguration.

The first ones to participate were the women spokespersons from the different Zapatista Caracoles of Chiapas.

From the Caracol of “Oventic”, they defined the Zapatistas as very “other” (meaning different) students, with a lot of curiosity for learning, asked the scientists: What does your heart say about organizing and struggling? What are you doing, when, where and why? What do you imagine you can do, what do you think, what makes you angry… do you see yourselves as rebel scientists?

The representative from the Caracol of “Morelia,” pointedly described how the state and federal governments operate, politically, ideologically and culturally, to ”deceive, divide and exploit” the communities by means of “social” programs and welfare-oriented political campaigns. For this reason the Zapatista communities have constructed their autonomous education, health, study of land, justice and democracy.

The spokesperson from the Caracol of “La Realidad,” emphasized that capitalism is not only out to exploit the labor force, but also the natural resources, witnessed in both the state and national context. “Don’t doubt your path, that science is for reaching that other world,” the Zapatista student exhorted in the name of her compañeros.

From the Caracol of “Garrucha,” they recalled that a year ago they were as students in the first edition del Consciences, and recognized the difficult and complicated work of science, to know how the world is formed. “Now is the time to organize collectively against the hydra,” they invited. They spoke out similarly against capitalism’s violence and death regarding women.

From the “Caracol of Roberto Barrios,” they expounded on the analogy of capitalism as a plantation (finca), where the original peoples are in resistance to said system. “May science become collective,” was their request at the same time that they remembered the late Comandanta Ramona and the 13 Zapatista demands for which they rose up almost 24 years ago.

Dr. John Vandermeer, Dr. Kristin Mercer and Dr. Ivette Perfecto, during this first day of Consciences, expounded on Agro-ecology, and how it is based on traditional knowledge, nature, political struggle and science, all to counteract the effects industrial agriculture, mono-crops and genetically modified organisms.

Agro-ecology, the researchers emphasized, is a practice, a social movement, and a science that seeks to develop new models of agriculture and forms of management that don’t contaminate the body or ways of life. For his part, Dr. Rodrigo Gómez, questioned whether medicine is sick, as well as governmental health programs, with a view to the privatization of medical service.

** You can watch and listen to the live transmission of the Consciences Festival (in Spanish) through these pages: http://conciencias.org.mx and through http://enlacezapatista.ezln.org.mx

← Las Abejas: The government “legalizes the war of extermination”
Sub Galeano: “The PRI always needs a terrifying crime as part of its project”  →

One Comment on “Zapatista bases of support ask: “Do you see yourselves as rebel scientists?””