Paramilitaries continue shooting at us, the displaced lament

“Just yesterday they fired shots in Panacam,” a Tzotzil woman affirms in the shelter established in the municipal capital of San Pablo Chalchihuitán (image, surrounded by other women and various children. Photo: Moysés Zúñiga

In Chalchihuitán fear and dispossession live and breathe in 4,000 displaced

“We don’t believe that negotiation is even useful. Just yesterday they fired shots in Pacanam, the problem has not ended,” says a Tzotzil woman in the shelter established in the capital of this municipality. They surround her, expectant, other women and numerous children in a scene that is constantly repeated. Although they begin to receive food, blankets and games from the Mexican Red Cross, the lack is total.

Dispossessed of their homes and crops, they lost their belongings, stolen or burned by armed residents from the neighbor municipality of San Pedro Chenalhó that obliged them to flee shootings since October 18 to take refuge inside Chalchihuitán, far away from the territorial strip in dispute, a fight that in two months already cost at least eleven lives, nine of them because of sickness and extreme fragility.

The defenselessness of those displaced from Chalchihuitán is total. That’s why they reiterate in the different camps that La Jornada visited “we cannot return, the shooting continues.” Although representatives of the municipalities in conflict met in San Cristóbal de Las Casas on December 21 with federal and state authorities and reached certain agreements to decrease tension, the displaced are not confident.

“The government does nothing when they are killing us and now it says that there is no problem now, that they are going to distribute aid to us. Right now I’m hungry. That’s how we all are, with children and grandmothers. All our chickens were in the house, we lost it two months ago,” says Vicente Pérez Gómez, the representative of Tzomolton, who has counted 423 people from his community outside a grocery store, with some plastic canopies and bars.

The current humanitarian crisis between this municipality, officially “one of the country’s poorest municipalities,” and Chenalhó, obeys a territorial conflict that dates back to 1976 and that one month ago reached it’s most critical moment in 40 years. On October 18 an armed group coming from Chenalhó attacked Chen Mut, burned nine houses and murdered Samuel Luna Girón. Then and in the following days, some 7,000 people, one third of the municipality’s population, abandoned their homes and parcels of land. An official census estimates that now there are close to 4,000 displaced from Chenalhó.

A medical brigade that toured the shelters this week describes that the Indigenous sought refuge “in the face of shots from firearms that even during our stay we were able to hear; the population is concentrated in strategic places in their small communities, in spaces like the basketball court or some church, to later at night go up to the mountains and thus protect themselves from a possible attack. The necessity of seeking refuge in the mountains, outdoors in the region’s rains and low temperatures, made the respiratory illnesses more acute.”

According to the medical brigade from Community Health and Development (Salud y Desarrollo Comunitario) and House of the Woman (Casa de la Mujer), “there was cold, hunger, isolation, uncertainty, fear and the omission of government authorities, added to a population that lives in extreme poverty, determinant of the deaths.”

On the edges of Kanamultic one can see houses burned and shot up with heavy-caliber weapons. In a wide canvas and plastic enclosure in the center of the town, Marcela Luna Girón, sister of Samuel, the murdered indigenous man, tells in Tzotzil when the shooting began and how she “has been suffering” for two months.

Just this Friday the displaced started to receive some governmental aid, while from Majumpepentic, Chenalhó, as of today they are shooting every afternoon to prevent them from returning to their homes distributed among the coffee fields. 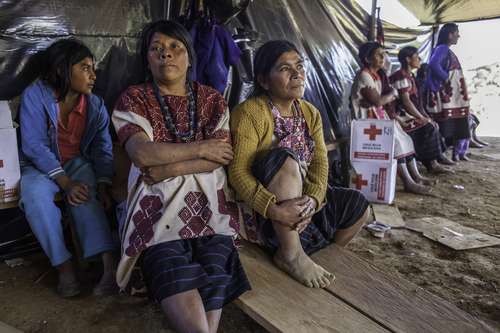 A few meters from the entrance to Chalchihuitán are found the first of many encampments where the refugees just started to receive aid from the Red Cross. Photo: Moysés Zúñiga Santiago.

They mention that shots come from the house of Miguel Silla Pérez. Other shooters are identified as Antonio Pérez and, in Fracción Polhó, Fernando Ruiz. Detonations were still heard last night from Pechiquil, a village that in 1997 was a paramilitary base. Twenty years later it still is.

“Those from Chenalhó aren’t afraid of the soldiers, they are not going to disarm them,” comments Juana Pérez, from whom they stole two pigs, 30 hens and all the rest. She left running with what she is wearing today. She doesn’t think it’s possible to go harvest the coffee, now that it’s time for that. A young woman that translates for the older women and carries a baby comments: “Their weapons are more powerful. We learned to recognize them. The new ones sound different, like an explosion.”

These refugees still don’t know that the government offers their attackers tablets in exchange for their weapons. Without being too cynical, one can ask what is more coveted here in these hollows, that apparatus or a high-powered weapon.

In the capitals of both municipalities one observes feverish activity of dozens of Civil Protection workers that bring aid, but nothing indicates that the problem will be solved. Pneumonia and diarrhea, cold, fear and dispossession reign in Chalchihuitán.

← Wishing you Happy Holidays and please support the Zapatistas
Las Abejas: The government “legalizes the war of extermination” →

One Comment on “Paramilitaries continue shooting at us, the displaced lament”