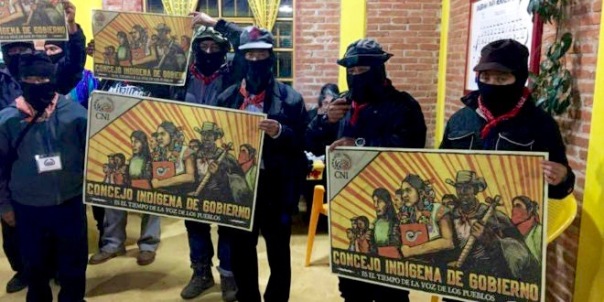 The spirit of revolt, the natural result of the earthquakes faced with the attitudes and behaviors of the authorities, leads dangerously to confrontation with our fascists, those above as well as those below.

We celebrate in every possible way the reaction of love and solidarity that came out of the Mexican depths in the face of misfortune. Mobilizations gradually take their course in novel and sensible forms of reconstruction. They resist the obsession to demolish and control, with which the authorities seek economic and political gains. They also attempt to convert tragedy into the opportunity to sow the seed of a new society.

On the other side is the horror. We must carefully explore the attitude of thousands, of millions, who, after being paralyzed, reach out and let themselves be carried away by the winds from above, generate their own turbulence from below.

The Indigenous Government Council and the intense activities of its spokesperson, Marichuy, who begins by denouncing the technological and bureaucratic traps of the National Electoral Institute, pose an immense challenge to governors, parties and analysts. They react as was expected, with belittling indifference, disqualification or repression and desperate control efforts.

Few were expecting, however, the profoundly racist and sexist reactions that circulate through the social networks. They are a symptom of a dangerous phenomenon. Faced with the spirit of peaceful and constructive revolt that the earthquakes enlivened, passions emerge that spring from the social crack that Raúl Zibechi analyzed in these pages last October 13. His article was precisely titled “The end of democratic societies in Latin America.” He stated that: “it’s necessary to ask why a new capillary right emerged so reactionary, so incapable of dialoguing, which has torn apart the social fabric from the United States to South America.” In truth we must ask ourselves that question and act knowing that there is now an “us,” of those who try to take advantage of the limits of the system in order to transcend it, and a “them,” of those who obtain benefits from it, more like a fortune than alms, and are dedicated to openly defending it… and to confronting us. In that group are the same big political and economic figures and the modest, middle class or popular people that are happily hauled to governmental events and then seek gifts.

Fascism is one of the possible responses to a crisis like the current one, when the existing order is breaking up. It promotes unity, implicit in the word fascio, and attempts to tame the crisis, more than to annul it. It lives from tension. It appeals to the supposed equality and unity of sentiments. It can be seen as “rightwing radicalism,” but upon incarnating in nationalist and pragmatic forms adopts forms that don’t always accommodate well into the left-right spectrum.

There is no strictly fascist ideology; it would be sterile to try to characterize it. What’s important is to identify the conditions in which it emerges, how it is propitiated and what makes its triumph possible. There is a resistance to making those analyses, because they show how many of those who proclaim to be antifascists or at least distance themselves from the fascisms of yesterday and today have already fallen into their networks.

In conditions like the current ones, a survival instinct becomes generalized. To the voice of those who can save themselves, each one tries to be a survivor… That happens especially among classes on the rise that feel at risk of sinking; that’s why fascism takes root above all in the middle classes. To survive, rapidly losing dignity, one must learn to climb over the other. Everything becomes valid and legitimate, as long as it’s not among those who are sinking. That’s why it’s necessary to invent Jews, a class at the expense of which one will survive. In different countries they are called undocumented or immigrants; among us Mexicans they are called Indians, marginal, homeless, fucked…

Facing the intolerance that circulates today everywhere, it’s not enough to call for tolerance, which always supposes discrimination and is fragile in times of crisis. It is precisely to open oneself hospitably to the other, recognizing their value, their place and their rights, respecting and celebrating their difference.

The principal remedy against the fascist propensity, which appears even in friends and neighbors, is called dignity. “What do you mean by dignity,” the principal government negotiator asked impatiently in San Andrés in 1996. It bothered him that the Zapatistas and their advisors would frequently appeal to it. He wasn’t familiar with it; that’s why he had to ask. That is the problem. Although the incident started a huge guffaw throughout the Lacandón Jungle, it’s no laughing matter. We must question in depth what it implies to ignore or lose dignity.

There isn’t any dignity, for example, in those who negotiate NAFTA, forced by Trump. Since they all think in economic terms, it’s pertinent to give you a quote from Keynes: “I sympathize with those who would minimize economic entanglement between nations, more than with those who would maximize it. Ideas, knowledge, science, hospitality and travels –these are the things that should be international because of their nature. But let goods be made at home whenever it’s reasonable and convenient; and, above all, let finance be primarily national.” The quote is enough to demonstrate the contradictions that the Trump era raises… and that Mexican negotiators will never understand. It illustrates another root of their fascisms, of those that have “them.”