AFTER THE EARTHQUAKE, THEY DENOUNCE ABANDONMENT OF THE COMMUNITIES OF ARRIAGA, TONALÁ and PIJIJIAPAN 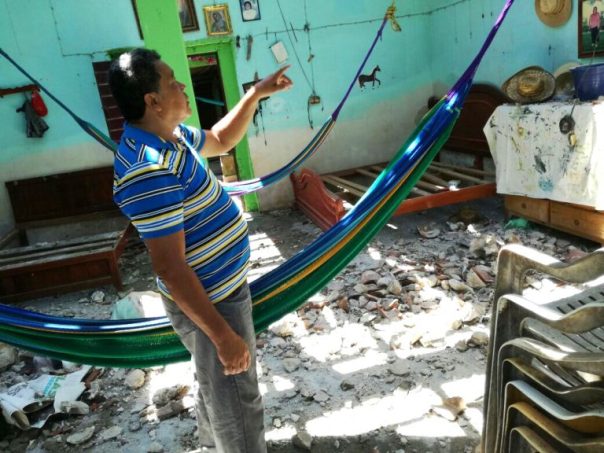 The inside of a damaged home in Tonalá, Chiapas.

A dozen social and civilian organizations denounced today that hundreds of vulnerable families continue being completely abandoned in the municipalities of Arriaga, Tonalá and Pijijapan, three of the municipalities closest to the earthquake’s epicenter last September 7. [1]

They said that the authorities have not visited their homes to evaluate the damage, have not informed them of any reconstruction plan, have not facilitated access to a shelter, nor have given them food, medical or psychosocial attention.

And that after the emergency passed they demanded that the three levels of government respect in time and form the community reconstruction plan that we the peoples propose since we don’t want the experience of 1985 repeated, when the Mexican government delayed two years in reconstructing the homes of those affected.

After meeting on Saturday and Sunday, September 23 and 24 in El Fortín ejido, municipio de Pijijiapan, in the Coastal Zone, the activists and organizations that were convoked by the Regional Autonomous Council of the Coastal Zone of Chiapas announced a series of irregularities that have been recorded 18 days after the earthquake.

After the meeting where there were members of the Mexican Network of those Affected by Mining (Red Mexicana de Afectados por la Minería, REMA) and of the Movement of those Affected by Dams and in Defense of Rivers (Movimiento de Afectados por las Presas y en Defensa de los Ríos (MAPDER), they all went to observe the bridge that connects the community of La Conquista with the El Fortín ejido in Pijijiapan; there they verified that it presents large fractures and that two walls are at the point of collapsing.

“This, they said, represents a grave danger for the inhabitants but, as of this date, Civil Protection Civil has not come to evaluate the damages, nor has it fulfilled its function of preventing accidents in order to protect the population in general, principally the students that have to cross it to go to school,” the activists said.

They pointed out that El Fortín and La Conquista are not the only communities on the coast of Chiapas that the authorities have abandoned and forgotten after the earthquake.

They indicated that in Tonalá, there are 4,700 damaged homes, 4,300 in Arriaga, 2,100 in Pijijiapan, and thousands more throughout that Isthmus-Coast region.

They denounced that there are hundreds of vulnerable families that are totally abandoned, in other words, that the authorities have not visited in their homes to evaluate damages, that they have not informed of any reconstruction plan, who have not been given access to a shelter, nor given food, medical or psychosocial attention.

“The peoples of this region have been forgotten and ignored because we are far from the tourist and economic centers that interest the governments and the corporations. They only come around when our territories interest them for developing their projects and making profits, as is the case with the implementation of the Special Economic Zones (SEZ) on the coast of Chiapas and the Isthmus of Tehuantepec. If the government doesn’t come to our communities now, it’s because it is expecting our disappearance to be able to extract our natural wealth in the future,” said the participants in that forum held over the weekend.

They pointed out that it is despicable that the national political parties refused to dedicate their funds for financing political campaigns to the reconstruction and support of those affected by the earthquakes after the September earthquakes in Chiapas, Oaxaca, Morelos, Puebla and Mexico City.

At the local level, they continue to see that those who aspire to political positions are taking advantage of the situation by distributing aid to win votes for 2018. For example, in the municipality of Jiquipilas, the delivery of government and citizen aid is distributed only to those affiliated with the Green Ecologist Party of Mexico.

And thanks to the struggle of the organized peoples, support has been obtained from civil society in Mexico and other countries, through the Regional Autonomous Council of the Coastal Zone of Chiapas, the Tonalá Civic Front (Frente Cívico Tonalteco) and the Digna Ochoa Human Rights Center AC. [2]

This aid is being used to feed the affected population in community kitchens and to offer them medical and psychosocial attention. And in the coming days, they will be occupied with developing the community labor of reconstructing homes.

The Secretariat of Civil Protection said that 18 days after the 8.2-magnitude earthquake, they continue with the preliminary evaluation of damages, which will conclude with the delivery of results from the state committee for evaluation of damages on October 5, according to the regulations of the Natural Disasters Trust Fund (Fideicomiso Fondo de Desastres Naturales, Fonden).

And at this time, 4,326 aftershocks from the September 7 earthquake have been reported and they don’t discard that more telluric movements will continue, which are considered normal for the re-accommodation of the tectonic plates.

Preliminarily, according to the census the federal government’s Secretariat of Agrarian, Territorial and Urban Development (Sedatu, its Spanish acronym) carried out, a total of 58, 365 homes are affected, of which 41,569 have partial damage and 16,796 are totally destroyed.

At this time six temporary shelters are active, with 84 families and a total of 307 persons, who are offered a dignified place to sleep, as well as food and medical attention.

[1] These organizations signed a formal denunciation. It can be read in Spanish at:

[2] This is the human rights center to which the Chiapas Support Committee wired donations raised for earthquake victims and the 3 organizations mentioned in this paragraph are adherents to the EZLN’s Sixth Declaration.

← Raúl Zibechi: What I learned from the Mexican people
Peña Nieto decrees putting the first 3 special economic zones into operation →