A mirror of the dispossession before the numbers dance 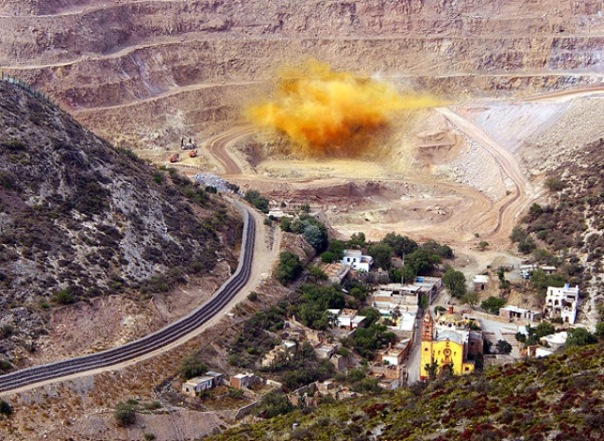 San Xavier Mining Company operates a mine on San Pedro Hill, in the state of San Luis Potosí, Mexico.

The fifth government Report offered no surprises, except that it grouped five years together rather than one, as appropriate. No doubt the numbers were important and, faced with that, I chose to look for the indigenous peoples; I found them converted into assistance numbers for indigenous individuals. With some schools at one hundred in some of their communities, scholarships, and perhaps, support for the so-called productive projects surely aids the beneficiaries’ survival, although not everyone. There was nothing about the systematic violation of the rights that the peoples have attained through struggles related to their autonomy, self-determination and territories, and nothing about the right to consultation. Nothing about forced displacements motivated by the violence or about the impact of the extractive policy that threatens indigenous peoples in the name of supposed progress.

Fortunately, we always have at hand mirrors of reality, chapters of a counter report with nothing imaginary. Yesterday, we presented one of them: the most recent book from the Mixtec intellectual Francisco López Bárcenas, La vida o el mineral (Life or mineral), in which he shows scenarios from mining dispossession in four cycles. He looks at historical reconstruction, in order to remember that mining in our country already existed in an incipient way before the Spanish invasion and continued during Colonialism and later in the stage from what’s called Mexican independence until the Porfiriato. [1] He places the third cycle after the triumph of the Mexican Revolution where the State, relatively, even becomes responsible for safeguarding the original property of the nation above natural resources. After that he arrives at the current and devastating cycle of open pit mining, in times of extractivism and of the State’s mutation into the protector of financial capital.

The book rigorously examines the ways in which companies with concessions can occupy the lowlands where minerals are found and forms of environmental protection, which is where confrontation with campesinos and indigenous peoples takes place. Among the first, it explains the purchase, leasing and expropriation, and their practical implications. At the same time, it also breaks down access to land so as to be able to extract the mineral, to locate the modalities for the authorization of the use of the soil; the impact on the environment is also analyzed. I highlight some of the theses, regarding the current cycle:

Mining is a flourishing industry, exceeded only by the oil industry, automotive industry and remittances from migrants. In the 1990s, after the reform to Constitutional Article 27 and the signing of the North American Free trade Agreement between Mexico, the United States and Canada facilitated access to the lowlands where one finds minerals, soil uses, water needed for processing the mineral, the prevention or remedying of environmental contamination and foreign investment in this rubric. For 2010, 28.58 percent of Mexican territory (the equivalent of 51.76 percent of the social property and a larger surface dedicated to food production) was granted to mining companies, the majority of transnational capital, and in large number Canadian, but also Australian, American, Peruvian, Russian, South African, Brazilian, Chinese and Chilean. Those companies are mostly engaged in the extraction of gold, silver, copper and zinc, although the tendency is that in the coming years they will migrate to exploit other minerals of strategic importance to the technology industry. The structure of the State was transformed to become an administrator of the interests of transnational capital.

On the possibility of changing the extractive model for another one that he names “indispensable or sensible,” he concludes that, for that to be possible would also require transforming the economic model on which it is maintained.

López Bárcenas lists the challenges for the indigenous peoples, some of whose resistances he noted and also pointed some out, obviously because mining dispossession is the central theme of the book. But we also know well that such mining dispossession in the four recent years was accompanied by the energy reform that gave entry to the arena of hydrocarbons as a direct source of dispossession and whose regulation is protected in order to convert public interest into private interest. The creation of Special Economic Zones constitutes the deepening of this policy. The peoples are already faced with that framework, and today it’s of little importance that one presidential term will end and another will begin, however progressive it may want to call itself. The country will be chained to mining concessions already granted for 50 years at a minimum, and renewable for another similar period. Behind the manifest destiny of the (welfare) assistance that is offered to the indigenous peoples, we can only say: “dispossession is hardly talked about, but it affects a great deal.”

← CNI comunicado on the earthquake in Chiapas and Oaxaca
Waffles & Zapatismo →