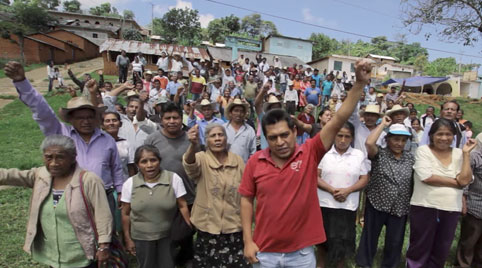 The Me’phaa (Tlapaneca) community of San Miguel el Progreso, or Júba Wajiín, in the municipality of Malinaltepec, Guerrero, literally triumphed over the Heart of Darkness mining project through a legal decision of national transcendence. Upon deciding in favor of the petition for a judicial order of protection (an amparo) [1] that said community requested against mining exploitation in that territory of La Montaña of Guerrero, first district judge Estela Platero Salgado conceded as well-founded the concepts of violation of their rights, and that they demonstrated the failure to fulfill the Mexican State’s constitutional and conventional obligation to respect the rights of this indigenous-agrarian community. [2]

In conversation with La Jornada, Valerio Mauro Amado Solano, president of the commission of communal wealth of Júba Wajiín, describes the extractivist spiral that began to hang over that and other neighboring communities since 2010: “First, pure rumors that they were going put mines without any notification from the government. We were the last to know what they sought to do on our lands. It was said that the Secretariat of Economy (SE) granted the concessions. The commissioners investigated and the SE delayed giving a response for one year, and then telling us that yes, it was true. In 2011, an act of the assembly rejected mining and presented it to the agrarian authority. We sought the protection of Tlachinollan (a human rights center with headquarters in the city of Tlapa), and in 2013 our first request for a protective order was filed.”

Miguel Santiago Lorenzo, a Ñuu Savi (Mixteco) representative who presides over the Regional Council of Agrarian Authorities in Defense of Territory, reminds us that the San Javier, La Diana and Toro Rojo concessions remain in effect on Iliatenco and Malinaltepec lands, granted to Hochschild Mining and Camsim Mines. “In the Council we will remain vigilant about what the government seeks to do.”

As an exception, in the Me’phaa agrarian nucleus of Paraje Montero (Malinaltepec) the assembly gave its approval to the Camsim Company. Totomixtlahuaca (Tlacoapa), Colombia de Guadalupe and Ojo de Agua (Malinaltepec) and the communal wealth (commission) of Iliatenco rejected the projects and announced that they would do everything possible so that the exploitation was cancelled.

Maribel González Pedro, Tlachinollan defender, remembers that there were exploration flyovers of that area in 2011. The SE and the state government divulged that the mining potential in Guerrero represented “a great attraction for national and foreign investment.” It’s appropriate to mention that in 2008 the Goldcorp Company occupied Carrizalillo (municipality of Eduardo Neri) for a succulent extraction of gold. Today, the Carrizalillo zone suffers a strong presence of criminal organizations, one of the secondary effects of mining.

In the heart of darkness

The Observatory of Territorial Institutions reported in 2013 that the affiliate in Mexico of the Hochschild Mining Company of Peruvian origin and British capital received two concessions from the SE: Reducción Norte of Heart of Darkness and Heart of Darkness, which encompassed more than 145,730 acres in the municipalities of San Luis Acatlán, Zapotitlán Tablas, Malinaltepec and Tlacoapa, in which they presumed the existence of gold and silver deposits.

The number of concessions began to grow in 2005, until involving a third of La Montaña, in other words, 19 municipalities that encompass 1,709,240 acres. The majority of its more than 361,000 inhabitants belong to the Nahua, Me’phaa and Ñuu Savi peoples.

The Tlachinollan Center documents that in La Montaña “the federal government has been granting concessions without the consent of the communities.” For 2016, the SE listed 44 concessions in the Costa-Montaña region. Before the violations of their rights, seventeen agrarian communities decided not to give their approval to mining exploration and exploitation. Júba Wajiín adopted the decision in April 2011. In September 2012 it obtained its registry on the National Agrarian Registry.

Valerio Solano emphasizes that the ancestral community of Júba Wajiín was demanding the titling of its lands since the 1940s, and it wasn’t until 1994 that the Unitary Agrarian Tribunal decided in its favor and the presidential decree was issued. “The process took six decades of struggle.” In 2009, the community joined the Community Police (CRAC-PC). Faced with the threat of mining, their conflicts are usually about boundaries with neighbor communities, and about security.

In 2012, the government decrees a biosphere reserve of 387,790 acres in La Montaña, Armando Campos, also of Tlachinollan, remembers. Since 2004, the Secretariat of Environment and Natural Resources and the National Forest Commission implanted a UN program that promoted community reserve zones. The same agencies and the Guerrero Intercultural Universidad impelled the reserve, which “restricted activities of the communities on their own lands and made them lose the administration of that territory.” The reserve would affect 13 agrarian nuclei in five municipalities. As a reaction, the communities met in October 2012 and ran into the problem of the mining companies.

Santiago Lorenzo, of the Regional Council, recounts that the indigenous blocked the Intercultural University and achieved the rector’s resignation for impelling the reserve behind the backs of the indigenous peoples. The government cancels the reserve. Then the organized communities start planning to resist mining. The council spreads to encompass 200 communities of 20 agrarian nuclei in eight municipalities of the Costa and La Montaña. The Me’phaa, Nahua, Ñuu Savi, Amuzgo and Afro Mexican peoples champion a resistance that has not been defeated. They have in common that they did not react against mining companies on their ground, but rather before their arrival.

Armando Campos, of Tlachinollan, points out: “There have been five years of legal achievements and declarations about territories free of mining. The legal pincers are closed so that no mining company has a margin of entry.” These peoples had previously refused to pay for environmental services. In 2014, they file their first legal action requesting a protective order, and they win it. The SE appeals the decision to the SCJN in 2015. The companies granted the concession to the Heart of Darkness desisted. In November of that year the SE publishes in the Official Journal of the Federation the declaration of freedom of the land.

“Thus, they stopped a protective order that would set a precedent for declaring the Mining Law unconstitutional,” explains Maribel González. “The SE and the Mining Chamber coordinate with each other to throw out the amparo and avoid an analysis of the Mining Law.” In December, the communities ask for protection against the declaration of freedom of lands, which opens the possibility of granting concessions to other mining companies. “The SE argues that Júba Wajiín ‘is not an indigenous community’ and therefore the right to prior consultation does not apply to it, which offends the Me’phaa.” The judge in Chilpancingo receives the amparo and orders an anthropology expert that favors the indigenous. Although the Mining Law does not recognize such a right, the Constitution and international treaties do.

Tlachinollan emphasizes that the judge’s decision in the protective order 429/2016, “is a new achievement for an indigenous community and recognition for the tireless and millennial struggle of San Miguel el Progreso to defend its territory and its life faced with the threat that open sky mining represents.” For the first time, a federal court orders that, if the SE should seek to grant new mining concessions there, “it must comply with its constitutional and conventional obligation in matters of indigenous peoples’ rights.”

The Mining Chamber reacted by presenting to the SCJN the Amicus Curie “Study about the Right to Prior Consultation of Indigenous Peoples and Communities and its problem around mining concessions,” where it requests: “the order of protection be denied” that Júba Wajiín requested, and questions whether prior consultation is necessary in a granting of concessions since “there is no susceptibility of real or potential affectation to the rights of indigenous peoples or communities.”

Valerio Solano proudly expresses: “In our territory we have controlled the violence. Neither the narco or the mining companies enter.” And the defenders from Tlachinollan conclude: “The Regional Council and its struggle are referents for what can be attained when the peoples get together to defend common territory.”

[1] An amparo (protective order) has the practice al effect of a restraining order or an injunction. It prohibits someone from doing something in order to protect someone or something. In this case it prohibits mining on Júba Wajiín lands in order to protect people and land in that community against the adverse effects of mining.

← ART, RESISTANCE AND REBELLION ON THE NET
Carlos Gonzalez: “We are going to reorganize the National indigenous Congress” →