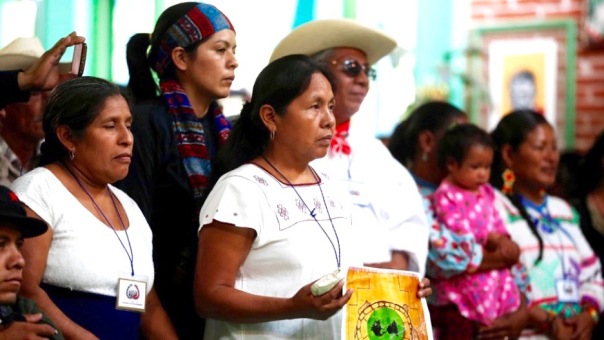 Ever since they made public the consensus proposal of the National Indigenous Congress (CNI) and the Zapatista National Liberation Army (EZLN), to integrate an Indigenous Gobierno Council for Mexico, whose spokesperson will be registered as an independent candidate for the 2018 presidential elections, we have given the task of participating in the round tables, conversations and workshops to various adherents to the Sixth Declaration, in order to reflect, analyze, expound, and of course debate this singular political action, in its multiple dimensions, challenges and commitments.

We’re dealing with another of the initiatives that come from the indigenous world, and, in particular, from Zapatismo and its close associates, for the purpose of articulating the resistances from below and to the left in order to confront that storm of civilizational scope that constitutes current capitalist globalization and that is expressed in a re-colonization and war of conquest of territories, natural resources, disposable human beings, destruction of nature, which are leading the human species and known life forms on a course to their possible extinction. That is, the current struggle of the indigenous and non- indigenous peoples goes beyond the worn out and dismissed schemes of left and right content, and is situated in the dichotomous position of being in favor of life or death. Rosa Luxemburg, who didn’t live the nightmare of Nazi-fascism or of the current form of criminal and militarized capitalist accumulation set forth almost a century ago, now the disjunctive of socialism or barbarism.

Within this context, what are some of the reasons to assume the CNI-EZLN proposal as our own?

1. It’s an idea discussed in depth by the Zapatista Maya communities, and afterwards by the more than 40 expressions of the original peoples that make up the CNI. It is not the fruit of a group of notables that think for the rest, but rather the result of horizontal deliberations of innumerable assemblies that analyzed it until reaching its approval under one of the principles of “govern obeying: convince and not conquer. It is not an “occurrence” of a determined person, nor does it have concealed governmental promoters that the institutional left and the anonymity of the social networks seek to “denounce.”

2. The integration of an Indigenous Government Council for Mexico is maintained in several decades of de facto autonomous experiences, in the entire geography of our dejected national territory, which contrast notoriously with the corrupt, illegitimate and discredited governments at all three levels and powers of the “partidocracy” that have produced a fed up citizenry and a profound crisis of so-called representative democracy. It’s evident that the group currently in power does not represent the interests of the people and of the Mexican nation, and yield governments of national betrayal that have renounced the exercise of sovereignty, and have delivered the country, its territory, labor force and natural and strategic resources to the transnational capitalist corporations, and have docilely submitted to the economic, political, ideological and military domination of the US, the hegemonic armed branch of global imperialism. The Indigenous Government Council and what results from it, is the embryo of popular representation and national sovereignty, starting from what Article 39 of the Constitution, still in effect, establishes.

3. The Indigenous Government Council and the independent candidacy of Compañera María del Jesús Patricio Martínez come from the sector of the exploited, oppressed and discriminated against that has for decades forged a strategy of resistance against capitalism. The autonomy that it institutes is, at the same time, a practice of government and doing politics radically different than what we know, without bureaucracies, intermediaries, professional politicians and caudillos. Despite the structural precariousness, the counterinsurgency war of attrition, the paramilitaries, organized crime, repression and criminalization of their struggles, these self-governments have shown their ability to organize the peoples in a process of reconstitution, awareness, participation of women and youth, strengthening of ethnic-cultural, national and class identities, through the collective and autonomous appropriation of community security, imparting of justice, health, education, culture, communication and economic and productive activities, as well as the defense of territory and its natural resources.

4. In a country in which the corruption and generalized cynicism of the political class rule, indigenous proposal is founded on the notable ethical congruency of its postulants. The EZLN as well as the CNI have practiced what they preach for decades, and have made the principles of not selling out, not giving up, not betraying, not supplanting or taking advantage of other peoples’ struggles a reality. The “for everyone everything, for us nothing,” is a reality throughout all these years. These organizations have been establishing the popular power of govern obeying, without asking anything in exchange and, despite the difficult living conditions, they have been in solidarity with all the struggles of those below.

5. The candidacy of an indigenous woman goes beyond a politics of quotas and feminist positions that don’t take into account the triple oppression that indigenous women have suffered and the cultural specificity in which they demand full rights. It is situated as a clear response to the reigning patriarchy, from a new face gender politics, whose origin we find in the EZLN’s Revolutionary Law of Women.

6. It’s a proposal inclusive, not only of the indigenous and with the indigenous, which makes the vindications of all the exploited, oppressed and discriminated of the earth its own, regardless of their ethnic or national origins and cultural characteristics. It’s not an essentialist or ethnic proposal. The proposal addresses all the peoples of Mexico, including the one of the majority nationality, that world where we all fit.

7. The initiative does not divide the partisan left; as Paulina Fernández points out, it places it on exhibit, and she would add, in all its racism and wretchedness.

← The colonial State and revolution
The pro-capitalist “left” →

One Comment on “Seven reasons to support the CNI-EZLN proposal”