“There will be no wall:” Sioux, Yaqui and Tohono O’odham 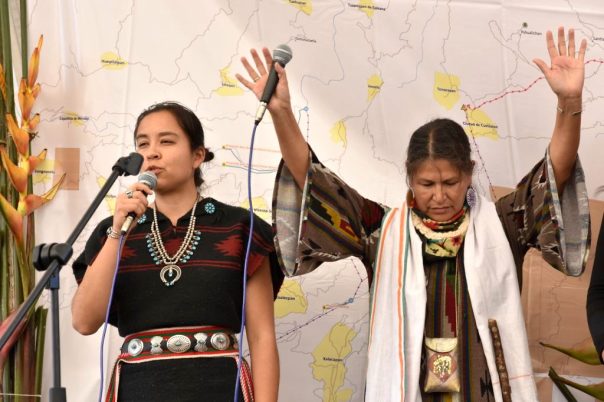 From the Editors of Desinformémonos

Trump’s “xenophobic and aggressive policy against Mexico” has placed the Native peoples of the United States and Mexico on alert. They declared that: “there will be no wall!” The struggle of indigenous peoples is added to on both sides of the border, and in Cuetzalan, in the Sierra Norte of Puebla, with the presence of representatives of indigenous peoples from New Mexico and Dakota, who all ratify the defense of their lands and territories.

Tohono O’odham, Sioux and different indigenous tribes are against the policies of Donald Trump and they promise to go as far as the ultimate consequences in defense of their territory.

The Standing Rock Sioux tribe and its defenders have pledged to resist Donald Trump’s executive order that authorizes the construction of an oil pipeline in Dakota and they are thinking about using legal measures, calling for civil disobedience and installing a resistance camp to protect the river water.

“President Trump has the legal obligation to respect the rights that the treaties recognize and guaranty that the whole process for the construction of the oil pipeline is fair and reasonable,” explains Dave Archambault, chief of the Standing Rock Sioux tribe. 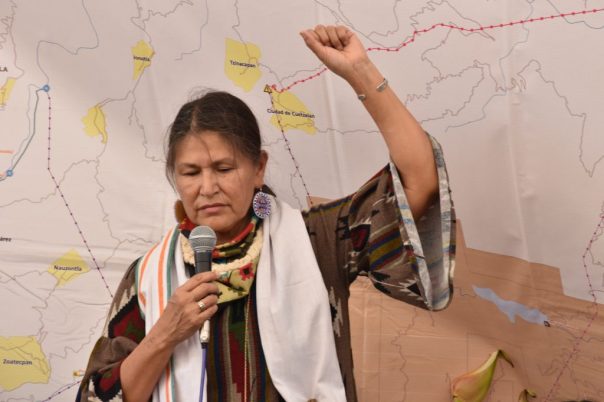 “The Trump administration is provoking a revolution that will make us stronger than ever.”

The Sioux peoples already faced the Democratic administration of Barack Obama, who they classify as “the lord of drones and wars.” The Sioux, together with the Mdewakanton Dakota and Dine peoples, achieved a victory in 2016 when they obtained the cancellation of Obama’s decree to construct an oil pipeline in Dakota. However, last month Trump decided to revive the decree with which is approved the construction of this work that they consider predatory to the environment and destructive to its ancient habitat.

Now, the Sioux once again reject the measure and make a call to mobilize, not just against the oil pipeline, but also against the “border wall” that Donald Trump wants to construct.

The Tohono O’odham tribe of Arizona, which controls more than two and a half million acres, in part bordering with Mexico, expressed its absolute rejection of the wall that Trump seeks to construct because it goes against ancestral customs.

This nation currently has 28,000 members. Prior to the Treaty of Guadalupe-Hidalgo that provoked the loss of more than half of Mexican territory to the United States in the 19th Century, the Tohono O’odham moved freely between the states of Sonora and Arizona. Now, they denounce that United States immigration police have unleashed a war against them, therefore they warned that they would mobilize against the border wall they want to construct.

The Yaqui Tribe shares territory in the state of Sonora in Mexico and in Arizona, in the United States. It was also recognized as a nation in 1978, and they have shown their support for the “anti-wall” movement. “Over my dead body,” is one of the slogans of the border tribes that share territory with Mexico. ”It divides our ancestral land and families that have crossed freely since before the borderline was drawn.”

“We arrived before nations and borders divided us,” an indigenous leader pointed out after Trump insulted members of the Hopi tribe with the title of “Pocahontas.”

Against the Donald Trump government, the wall, forced deportations and other xenophobic policies, Mexican and American workers must unify their demands with those of the Sioux and Tohono O’odham peoples. Bring down the wall by constructing resistance with workers, indigenous peoples and women on both sides of the border.

From Standing Rock to the Sierra Norte of Puebla: indigenous peoples join together in defense of territory

The campesino, indigenous and mestizo peoples of the Northeast Sierra of Puebla have demonstrated, once again, their capacity for organization and self-determination.

As is now the custom in this region, every other month, and now on February 18, hundreds of people came from 173 towns and 16 municipalities to gather together in the 18th Assembly in Defense of Territory to reaffirm the power to decide on their lives and the destiny of their territories.

The meeting was held in the municipal capital of Cuetzalan, [1] where its residents wage an important fight against the imposition of an electric substation and high-tension wires. According to what the web page Hijos de la Tierra has reported, those installations are destined to favor mining megaprojects, fracking and hydroelectric dams in la region.

Representatives of social movement struggles were present from the Indigenous Peoples Front in Defense of Mother Earth, of San Francisco Xochicuautla community, the Maya community of Hopelchén, Campeche that struggles against the planting of transgenic seeds, students from the rural teachers colleges, mothers from Ayotzinapa and two representatives of the Native peoples of New Mexico and South Dakota in the United States, who organize and defend their Standing Rock territory and rivers against the “Dakota Access” pipeline impelled once again by Donald Trump.

The municipal presidency of Cuetzalan and representatives of the Federal Electricity Commission (CFE, its initials in Spanish) were invited to the meeting so that they could provide information about the motive and objectives of the electric project that they want to develop at that place. They did not attend however and therefore the assembly decided to continue stopping the construction work and to maintain the encampment installed since the month of November.

[1] Cuetzalan, Puebla is one of Mexico’s “magical towns.” See: http://www.visitmexico.com/en/magicaltowns/center-region/cuetzalan

Originally Published in Spanish by Desinformémonos

← What Comes Next I: Then and Now
What’s Next? II. The Urgent and the Important →

One Comment on ““There will be no wall:” Sioux, Yaqui and Tohono O’odham”