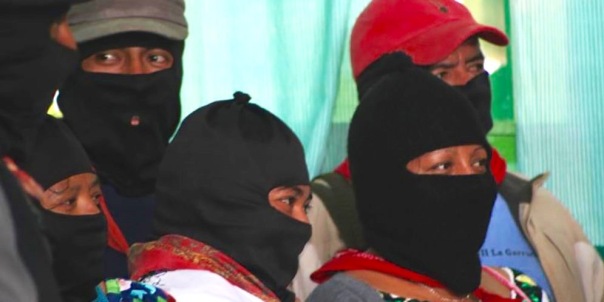 The decision of the Zapatista National Liberation Army (EZLN) and the National Indigenous Congress (CNI) to submit the possibility of presenting an indigenous woman as a candidate for the presidency in the 2018 elections to its support bases and communities all over Mexico provoked the most diverse reactions but left no one indifferent. In the days following the diffusion of the comunicado “May the earth shake at its center” (October 14), there were those who maintained that it is an attempt to divide the left and therefore favoring the right, to those that assured that they set aside their principles by entering into the electoral path.

Days later another comunicado appeared, signed only by Subcomandante Insurgente Galeano, arguing with some detractors without naming them. Beyond the polemics and interpretations, it’s convenient to read the comunicado attentively to comprehend the objectives of the movement.

What is being proposed with the candidacy is: “to initiate a consultation in each one of our towns to dismantle from below the power that those above impose on us and that offers us a panorama of death, violence, dispossession and destruction.” Some lines later, they clarify that: “our struggle is not for power, we don’t seek it; but rather we will call on the original peoples and on civil society to organize in order to stop this destruction, to get stronger in our resistances and rebellions, in other words in the defense the of life of every person, every family, collective, community or barrio. We make a call to construct peace and justice reweaving ourselves from below, from where we are what we are.”

The indigenous woman candidate to the presidency, assuming the communities approve it, will be the spokesperson for “an indigenous government council” that will bring the word of all to society’s corners for the purpose “of constructing a new nation by and for all, of strengthening the power from below and to the anticapitalist left.”

These words spell out the principal objectives of the candidacy that the Zapatistas promote.

The first disposes of a reading of the Mexican reality, which can be extended to the current state of the world. In the last eight years the war on drugs, declared by ex president Felipe Calderón (2006-2012), cost 120,000 deaths and 30,000 disappeared in full democracy. Something unusual in Latin America, where genocides like the one in Mexico have happened under regimes that are not proclaimed democratic.

They are also convinced that: “the offensive against the peoples will not stop but rather they seek to make it grow until having finished off the last trace of what we are as peoples of the countryside and the city.” As they had already expressed during the “Critical Thought versus the Capitalist Hydra” gathering, in May 2015, they observe that a storm is battering against the peoples. This proposal of an electoral candidacy is produced within that framework. It’s only fitting to add that the dominant Mexican classes like those in a good part of the world, are divided, confronted and for the moment in conflict with each other, which increases the system’s decomposition and the violence against the peoples.

The second question to take into account is that neither the Zapatistas nor the CNI enter into the electoral path. They do not propose presenting candidates for deputies, senators, mayors or governors; only a candidate to the presidency. This point is crucial. The voting results are not what’s important, but rather something else, which is what they seek to explain in their communiqués.

The key is what they understand about the “power of below” with which they seek to dismantle the power of above. They enumerate: “their own communications media, self-defense community police, assemblies and popular councils, cooperatives, the exercise and defense of traditional medicine, the exercise and defense of traditional and ecological agriculture, proper rituals and ceremonies to pay Mother Earth and to continue walking with her and on her, the planting and defense of native seeds, forums, publicity campaigns and cultural political activities (…) That is the power of below that has kept us alive.”

It is to that society or counter-society that the electoral candidacy is directed; in order to make it stronger, more visible for others from below and, if not misinterpreted, to contribute others getting organized. The interventions of Subcomandante Insurgente Moisés in the 2015 gathering were a permanent, repetitive, call to organize, “organization for construction and to free oneself from the capitalist system.” But also for confronting what Galeano defined as the catastrophe/storm that is coming over the peoples.

A necessary clarification: the Zapatistas and the Indigenous Congress do not seek to organize the others. Each social sector must organize itself as it wishes and is able. They only seek to help, contribute to what is possible for that organization, but without substituting anyone. That is a question of principles. An intervention of Moisés at the closing of the “CompArte” Festival, on July 29 of this year in Oventik, makes it very clear:

“There are those who think that we should come out and go fight for the teachers. If one thinks like that, then you have not understood anything. Because that means I expect that someone will come and fight for me. The Zapatistas don’t ask anyone to come to fight for us. Each struggle is unique, and we must mutually support, but not take away the place of each fight. The one who struggles has the right to decide what path to take and with whom to walk. If others interfere, then it’s no longer support, but rather it’s supplanting. Support is respect and not direction or command.”

The third reflection is related to a problem that has always occupied all revolutionary processes and that could be summed up in a question: how to relate and work with other movements and organizations that don’t agree with our objectives and have their own modes of work, but suffer similar oppressions?

Based on an investigation of the Spanish-American University of Puebla, Víctor Toledo estimates that in just five Mexican states there are “more than a thousand new projects,” which include from the Zapatista Caracoles to indigenous organic coffee cooperatives and many cases of community self-management (La Jornada, September 13, 2016). All over Latin America, and in the world, are tens of thousands of initiatives that include millions of people that are making resistance to neoliberalism and capitalism possible.

That non-capitalist and anti-capitalist world exists, although disperse, like islands and archipelagos. It’s not about inventing it, but rather about empowering it. Or, as the comunicado says, constructing the new world “from below,” which according to the dictionary is at once spinning and shaking or buzzing, a synonym of “retemblar,” as the Mexican national anthem says. If those of us below tremble, we shake each other and provoke a political tsunami capable of breaking the bank of the dominant classes. That seems to be the principal message of the indigenous candidacy to the presidency.

Published in Spanish by Viento Sur