And it shook! A Report from the Epicenter 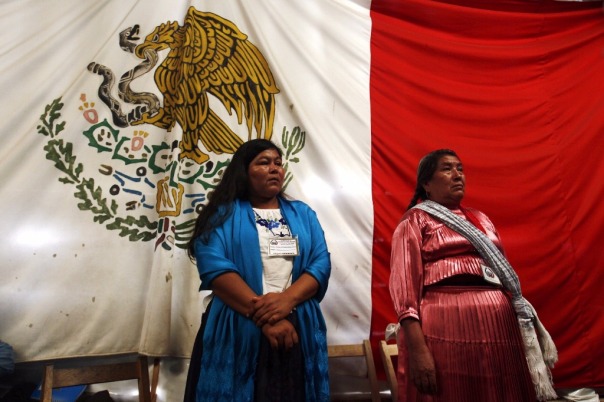 To the Original Peoples of Mexico

To Civil Society of Mexico and of the World

To the National and International Sixth

To the Free Communications Media

It is the time of the peoples, for seeding and reconstructing ourselves. It’s the time for going on the offensive and this is the agreement that is drawn in our eyes, in the individuals, in the communities, in the towns, in the National Indigenous Congress; it’s time that dignity governs this country and this world and on the way democracy, liberty and justice will flourish.

We announce that in the second stage of CNI 5 we minutely evaluated the result of the consultation with the peoples that are the National Indigenous Congress and that took place in the months of October, November and December 2016, in which in all the modes, forms and languages that represent us in the geography of this country we issued agreements of communal assemblies, ejido assemblies, of collectives, municipal, inter-municipal and regional, that one more time lead us to understanding and assuming with dignity and rebellion the situation through which our country, our world crosses.

We greet the messages of support, of hope and of solidarity that intellectuals, collectives and peoples gave, which reflect hope in our proposal that we named “May The Earth Shake At Its Centers” and that web made public in the first stage of CNI 5. We also greet the critical voices, many of them with fundamentally racist arguments, which reflect a furious indignation and scorn over thinking that an indigenous woman seeks not only to contend in a presidential election, but also sets forth to really change, from below, this pained country.

To all of them, we say that in effect the earth shook and us with her, and that we seek to shake the conscience of the nation, that in effect we seek that indignation, resistance and rebellion figure in the 2018 electoral ballots, but that it’s not our intention to compete in anything with the parties and all the political class that still owes us a lot; every dead, disappeared and incarcerated person, every dispossession, every repression and every defamation. Don’t be confused about us, we don’t seek to compete with them because we are not the same, we are not their lying and perverse words. We are the collective word of below and to the left, that which shakes the world when the Earth shakes with epicenters of autonomy, and that make us so proudly different that:

Our resistances and rebellions constitute the power of below, they don’t offer promises or bright ideas, but rather real processes of radical transformation in which all participate and that are tangible in the diverse and enormous indigenous geographies of this nation. It’s because of that as the National Indigenous Congress, 43 peoples of this country gathered together at this 5th Congress, AGREE to name an Indigenous Government Council with representative men and women from every one of the peoples, tribes and nations that belong to it, that this council proposes to govern this country. And that it will have as the voice an indigenous woman from the CNI, in other words, that she will have indigenous blood and she knows her culture. Or it’s that it has as spokesperson an indigenous woman from the CNI that will be an independent candidate to the presidency of Mexico in the 2018 elections.

It’s because of that that the CNI as the House of All the Peoples is the principle one that configures the ethics of our struggle and in which all the original peoples of this country fit, those principles on which the Indigenous Government Council is lodged are:

To obey and not command

To represent and not supplant

To serve and not serve yourself

To convince and not conquer

To step down and not up

To propose and not impose

To construct and not destroy

It’s what we have invented and reinvented not for gusto, but rather as the only way we have to continue existing, in other words those new paths taken from the collective memory of our own forms of organization, are the product of resistance and rebellion, of making a front every day against the war that has not stopped and that has not been able to finish with us. In these forms it has not only been able to draw the path for the integral reconstitution of the peoples, but rather new civilizing forms, collective hopes that become community, municipal, regional and state hopes and that are giving precise answers to real problems in the country, far away from the political class and its corruption.

From this 5th National Indigenous Congress we call to the original peoples of this country, to the collectives of the Sixth, to the workers, the fronts and committees in struggle in the countryside and the cities, to the student, intellectual, artistic and scientific community, to unorganized civil society and to all people with a good heart to close ranks and go on the offensive, to dismantle the power of above and to reconstitute ourselves no longer only as peoples, but also as a country, from below and to the left, to add ourselves to a single organization in which dignity is our ultimate word and our first action. We call on you to organize and stop this war, to not be afraid to construct and plant over the ruins left by capitalism.

That’s what our humanity and our Mother Earth that is the land demand from us, in it we find that it’s time for rebel dignity and that we are materialized convoking a constitutive assembly of the Indigenous Government Council for Mexico in the month of May 2017 and from this moment we will tender bridges to the compañeros and compañeras of civil society, the communications media and the original peoples to make the Earth shake at its core, conquering fear and recuperating what belongs to humanity, the land and the peoples, for the recuperation of territories invaded or destroyed, for the presentation of the country’s disappeared, for the freedom of all political prisoners, for truth and justice for those murdered, for the dignity of the countryside and the city. In other words, have no doubt, we’re going for it all, because we know that we face perhaps the last opportunity as original peoples and as Mexican society of changing peacefully and radically our own forms of government, making dignity the epicenter of a new world.

Never More a Mexico Without Us