CNI-EZLN: Despite aggressions, the consultation continues

JOINT COMMUNIQUE BY THE NATIONAL INDIGENOUS CONGRESS AND 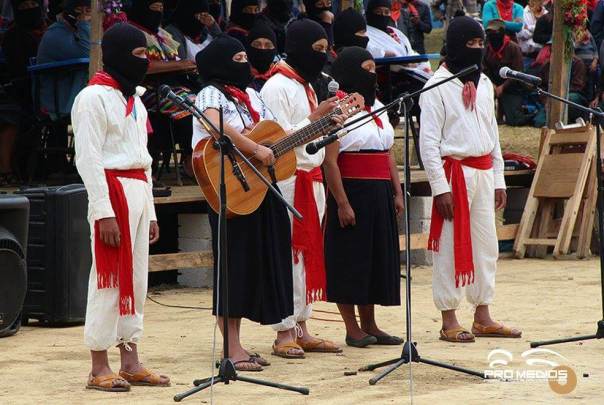 TO THE PEOPLE OF MEXICO:

TO THE PEOPLES OF THE WORLD:

TO THE FREE MEDIA:

The steps taken by our peoples are great, wise steps when taken in collectivity, and the National Indigenous Congress turns with attentive ears to listen to each other, to the thoughts of we who are the word and the agreements of the 5th CNI. We continue in permanent assembly, traveling to all corners of our country, Mexico.

Our permanent assembly arises from and convenes among the peoples, nations, and tribes of all the languages spoken by the National Indigenous Congress; in large and small assemblies; in meetings of communal councils, in deep reflections by dispersed families; in regional forums and ceremonial spaces. In our collective words, we continue to conclude that it is the time of our peoples, time for the earth to tremble at its core.

The fears of the powerful, the extractive companies, the military, and the narco-paramilitaries are so great that our consultation is being attacked and harassed in the places where our peoples are meeting to discuss and decide the steps to take as the CNI. For that reason, we denounce the following:

– In the indigenous Nahua community of Santa María Ostula, Michoacán, there is intensified narco-paramilitary harassment by the Caballeros Templarios [Knights Templar] cartel, which threatened, on a paper signed on November 19, 2016—the same date that a regional assembly on the coast of Michoacán was discussing the resolutions from the first stage of the 5th CNI—to undertake a “cleansing” of those participating in mobilizations alongside the community police.

– As agreed upon in the assembly of the 5th CNI in October 2016, our compañeros have traveled to different geographies of the country where Native peoples have requested dialogue with delegates of other peoples with respect to our political proposal. These compañeros have been victims of aggressions and harassment by criminal gangs or unknown people, including the burning of homes in their communities and aggressions by vehicles trying to push them off the roads they must travel.

– While foreign companies attempt to take control of 12 oil wells in Zoque territory in Northern Chiapas, this past November 23, 2016, a group of armed men pretending to be government-sponsored teachers, and with the consent of the Assistant Secretary of Federal Education in Chiapas, Eduardo Campos Martínez and the boss, Delfino Alegría García, kidnapped a group of indigenous professors from the National Coordination of Education Workers (CNTE) in the northern zone of Chiapas. They also attacked them with high-powered weapons outside the office of the Secretary of Education in the municipality of Ixtacomitán, Chiapas. The sneak attack claimed the life of Zoque teacher Roberto Díaz Aguilar, originally from Chapultenango, Chiapas, and injured three others.

– The teacher Irineo Salmerón Dircio, Coordinator of the House of Justice in San Luis Acatlán and member of the Regional Coordination of Community Authorities (CRAC-PC), was kidnapped/disappeared by an armed group in the municipality of Tixtla, Guerrero. Two days later his lifeless body was found in the municipality of Chilapa, Guerrero, just a few days after at least 15 communities from the Emiliano Zapata Indigenous and Popular Council of Guerrero had held an assembly in the same municipality as part of the consultation we are currently carrying out.

– From the collective heart of the Native peoples of the National Indigenous Congress, we pronounce our absolute respect for the territory of the Sioux people, in Standing Rock, North Dakota, where more than 200 tribes are organizing to stop the plunder the capitalists are trying to impose through oil pipelines that destroy water sources and ceremonial sites. We condemn the brutal repression these tribes were subject to this past November 20, and the repression planned against them with the announcement of an ultimatum to vacate their lands. If we Native peoples had ever responded to the ultimatums of the powerful, we would have ceased to exist centuries ago. To the Sioux People we send a brotherly embrace and we reiterate that they are not alone, that their pain and rage are ours, also. We call on the Native peoples of the United States and Mexico, on the free media, and on civil society to strengthen their solidarity with this historic struggle.

We send a greeting of solidarity to the compañer@s of the Chanti Ollin community, adherents of the Sixth Declaration of the Lacandón Jungle, who were violently evicted—in the middle of the night on November 22, 2016—from the building where they promote culture, art, and the alternatives necessary for a new world. We repudiate the repressive, sellout policies represented by the bad government of Mexico City.

We salute the mobilizations held by the Committee in Defense of Indigenous Rights (CODEDI) from the coastal region of Oaxaca against the repressive policies of the bad governments who, for lack of any valid reason, use criminalization as their only recourse to impose 11 hydroelectric projects in the coastal region of Oaxaca, including the Multi-Use Hydraulic Exploitation Project Paso de la Reyna.

Likewise, the peoples, nations, and tribes of the CNI express our profound respect for and solidarity with the Cuban people, who have shown the world that through dignity we can reconstruct the fabric unraveled by capitalism. We know that their resistance and rebellion will continue shining and concretizing hope.

FOR THE FULL RECONSTITUTION OF OUR PEOPLES

NEVER AGAIN A MEXICO WITHOUT US