The education project of the new right

[Admin: This article shows the importance of autonomous (self-governed) educational institutions, like those the Zapatistas are constructing in their communities.] 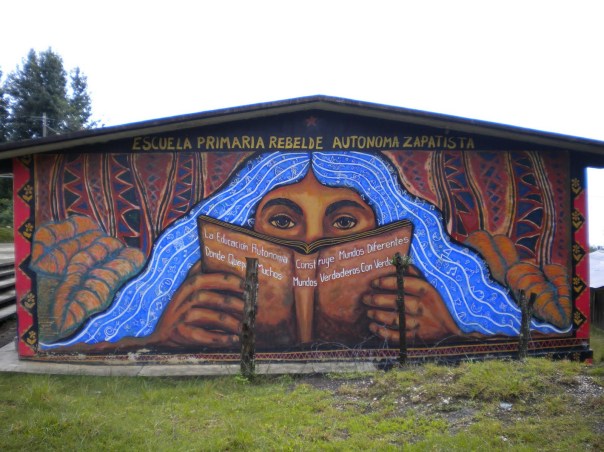 Zapatista primary school in the Caracol of Oventic, Chiapas.

A new right appropriate for extractive times and for exploitation-piracy against the peoples has been born; a right after the Welfare State, which no longer aspires to development, but rather to consolidate inequalities, segregation of the half that is poor, mestizo, Indian and black on our continent. An implacable right formed in rejection of the popular, in national sovereignty, in laws and constitutions.

In the terrain of education, that new right seeks to rid itself of prior commitments, among them the laity and freedom of the teachers, for accommodating the educational system to the period of war and confrontation that we travel through. The objective is to retake control of the whole of the education system, from the ministers to the classroom, consolidating an anti-emancipatory education and one in which control of the population is almost exclusively the objective.

The non-governmental organization School Without Party was born 12 years ago in Brazil, very active on the social networks and the big media, articulated with deputies and councilors from the most diverse parties to get their proposals approved. On its website (escolasempartido.org/) one can access the six-point program entitled Teachers’ obligations, in which it emphasizes that the teacher shall not promote his own ideas in the classroom, prejudice the students that profess different ideas or make political-party propaganda and shall be limited to exposing the program in a neutral way; and it grants parents the selection of the “moral education” that they want for their children.

Some “principles” of School Without Party appear compatible. Nevertheless, they bring with them objectives that make us go back more than a century. On the one hand, it differentiates between the act of educating and that of instructing. For them, education is the responsibility of Church and family, while teachers should be limited to instructing; in other words, to transmitting knowledge as if it were neutral, ahistorical, de-contextualized.

The second is what they consider as “indoctrination” in the classroom. Talking about feminism, homophobia or reproductive rights, for example, would be like imposing “gender ideology” in schools. Everything that might deviate from the subject is considered “indoctrination,” a situation that en los proposed legislation that School Without Party has presented in various municipios and in state parliaments would be classified as a “ideological assault crime” and “abuse of authority,” punishable with prison and aggravated sentences.

In the part “capturing the indoctrinator” on its web page, appears a long list of common classroom situations, like “defaming historic, political or religious personalities,” among many others. The teacher would have to mention Hitler, Pinochet or Mussolini without more, like any other personality, without establishing differences, leaving opinion exclusively to the parents. It’s the same with respect to genocides, femicides and so on, because mentioning values is rigorously prohibited. They consider that debates about sexual diversity, contemplated in the curricula of many countries, would in this case be “unconstitutional.”

One of the more serious practices School Without Party promotes is spying on the teaching practice to denounce it afterwards. Under the epigraph “Planning your denunciation,” it asks the students and parents to carefully take notes or film the moments in which the teacher would be “indoctrinating” the students. They promote attitudes that lead the youths to police the teachers.

One of the central objectives of the new right within the educational terrain is the disqualification of the teachers that would be guilty of all the evils of education, from scholastic failure to low quality of instruction. In that way they get to divert attention from the structural problems in education, focusing only on the consequences and hiding their causes. The teacher is always suspected of leftism. In parallel, they consider that the students don’t have the capacity to form their own convictions and that they must be subject to paternal, church or teaching authority.

As was expected, the teachers have reacted with campaigns denouncing the project, since it was approved in the state of Alagoas, Brazil, and will be brought up in others. But we should not forget that what is proposed in this conjuncture, not only in Brazil, is to stop short the growing student movement, in particular the secondary students, who are the least susceptible of being coopted by the state institutions and the electoral left.

In effect, the Brazilian political crisis is modeled by the mobilizations of June 2013, a crisis that is far from having been closed with the illegitimate removal of President Dilma Rousseff. Even Chile, the exemplary neoliberal regime for its stability, travels through a crisis of legitimacy as a consequence of the powerful student movement that since 2011 opened spaces through which diverse social actors are passing. One of the most important impresarios, Andrónico Luksic, recognizes that “the country is falling” and emphasizes the role of the movement for education in this crisis (goo.gl/qpXIsA).

Something similar is happening in other countries. In Paraguay students are shown as a powerful actor in the middle of the reactionary government of Horacio Cartes. New nests of young rebels are present in almost all countries. To say nothing of Mexico, after the parting of waters that was Ayotzinapa.

A good part of the objectives that School Without Party proposes in Brazil may seem utopias in that they have scarce support. Nevertheless, they should not be underestimated. When the political crises deepen, powerful bifurcations appear; the right takes off the veil to show itself for what it is: the party of order, disposed to run over everything. The lefts are the ones that must decide if they opt for the institutions or for accompanying the resistances.