After meeting with Miranda Nava, the CNTE seeks “political exit” 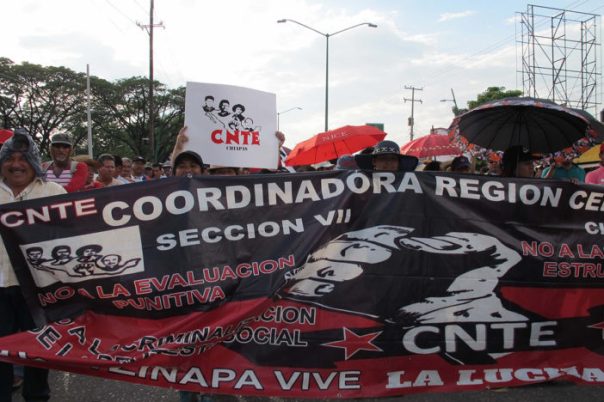 CNTE banner, apparently from the Central Region of Chiapas. Note on the bottom a portion of the slogan: “Ayotzinapa Vive, La Lucha Sigue!”

The National Coordinator of Education Workers (CNTE) in Chiapas agreed early this morning to seek “a political exit” to the teachers’ movement, after meeting with the former Assistant Secretary of Governance and now the Secretary of Social Development (SEDESOL), Luis Enrique Miranda Nava, who traveled to Chiapas yesterday (Monday) to meet with the leadership of this dissident bloc of the SNTE.

Miranda Nava arrived from Mexico City at the Ángel Albino Corzo International Airport in a small jet belonging to the Presidency of the Republic. Governor Manuel Velasco Coello, Juan Carlos Gómez Aranda, the state’s Secretary general of Government, Jorge Luis Llaven Abarca, Secretary of Public Security and Citizen Protection in Chiapas and Roberto Domínguez Castellanos, Secretary of Public Education in the State traveled there, some 50 kilometers from the state capital.

Pedro Gomez Bamaca, one of the CNTE leaders, arrived later accompanied by 30 teachers from Sections 7 and 40. There, in that meeting, Miranda Nava corroborated the verbal offers made to the CNTE in Chiapas; in other words recognizing the 11 points that had already been sent for consultation last week, but were held in suspension.

Among these points are: no application of the education reform for the rest of the presidential term (sexenio) of Enrique Peña Nieto, cancellation of the arrest warrants, unblocking of the union’s bank accounts, payment of withheld wages to teachers commissioned in the union, 150 million pesos in school infrastructure material and other agreements.

One of the teachers’ leaders told Proceso that after listening to the federal government’s offer from the president’s crony, they moved to the Che Guevara Auditorium of Section 7 of the SNTE, where after holding their state assembly from Monday night to the early morning of Tuesday, the CNTE decided to seek the “political exit” to the teachers’ movement, which would imply ending the strike and taking the mechanism for a political exit and the date to a consultation with the las mobilized bases.

They will consult again with rank and file teachers

The state assembly will meet today September 13 at 6 pm to gather proposals from the base and the Sectional Executive Committee seeks interlocution with the state government beginning from there.

The official resolution points out that “the national teachers’ strike continues, adopting another modality of struggle.” It also says that this State Assembly decides to give a political exit to the movement.”

It also agreed to open “a recess to carry out a round of delegation assemblies and report on the situation that the movement holds in this stage.” Section 7 of the SNTE unionizes some 57,000 teachers in more than 800 union delegations in 24 teacher regions.

That same official resolution, besides calling the State Assembly for this Tuesday at 6 pm in the Section 7’s Che Guevara Auditorium, ordered all Chiapas teachers to withdraw from the occupation in Mexico City and to concentrate in the state capital.

Today, the Pueblo Creyente of Simojovel, headed by Father Marcelo Pérez Pérez, marched to repeat their support for the teachers’ movement faced with the threat there was of using federal and state for evicting them from their occupation in the state capital.

Last night, thousands of federal and state police, as well as functionaries from the services for the procurement of justice, civil emergency services and others were mobilized in an “intimidation action” towards the teachers’ movement.

The police patrolled through the north and south sides of the city, which put the CNTE teachers in the occupation on alert all night and early morning.

Today the teachers, once again hold the State Palace, the federal building, the Municipal Palace, the State Congress and two offices of the Treasury Secretariat of the state government in their possession, all these buildings in the center of the city.

The Secretary of Public Security, Roads and Municipal Transit, Sergio Severiano Dionisio, announced that a group of approximately 60 people wearing ski masks (pasamontañas), kidnapped a Transit vehicle, and therefore an operation to find those responsible has been implemented.

“The acts occurred on Second Avenue South at 11 East Street, the individuals were aboard a small white truck. At this time it is not known who might be responsible, but that is already being investigated.”

Finally, the municipal functionary announced that the vehicle belonging to “Transit” carried the economic number 493 and that the investigations for finding the vehicle’s whereabouts started immediately.

Faced with the possible arrival of the federal and state police forces last night, teachers used the patrol car as a barricade. They used several trucks of companies like FEMSA, Pepsi Cola and others in the same way.

← Nochixtlán nurse: we attended to injuries like in a war
EZLN: One House, Other Worlds →