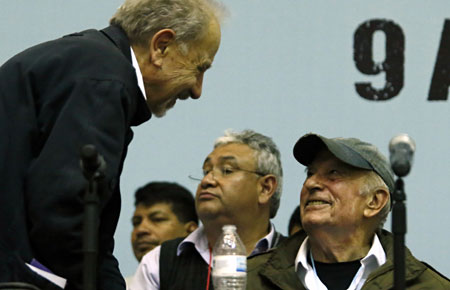 Facing a neoliberal globalization project that seeks to make education a “culture of servitude,” the ex rector of the Autonomous National University of Mexico (UNAM), Pablo González Casanova, exhorted the teachers to construct a real education reform that will contemplate an emancipatory and critical formation, which he defines with clarity two leading principles: the values of morality and truth, understood as the construction of the defense of the collective above individual wellbeing, of solidarity and cooperation, but also of the permanent critique of what occurs and of that which generates it.

In the first Forum towards the construction of the democratic education project, convoked by the National Coordinator of Education Workers (CNTE), González Casanova reiterated his solidarity with the teachers’ struggle and pointed out that the failure of the education reform education reform and its lack of viability in different states is the result of an historic process that “happens between confrontations and negotiations.”

Because of that, the academic said, “we must think more profoundly to yield that global and stormy struggle for an emancipatory education, knowing that ours is against the neoliberal globalization that the business, military, political and media corporations push.”

They ask to suspend the evaluation

For its part, the group of academics that advises the dissident teachers showed itself to be in favor of the “immediate suspension” of the whole evaluation system as the teachers’ obligation, as well as of its labor and legal consequences, after considering that they must “eliminate the punitive, hierarchic and contrary character of the labor laws” with which it is applied.

Before dissident teachers from various parts of the country, human rights defenders, unionists, representatives of social organizations, investigators, academics, journalists, legislators and labor lawyers, Hugo Casanova Cardiel, professor-investigator at the Institute for Research on the University and Education, read the position subscribed to by more than 10 experts from the education sector, wherein they demanded that: “all the punitive actions that have been exercised and continue being exercised against the teachers ‘be suspended or be left without effect.”

They outlined the urgency of constructing alternative evaluation proposals without a punitive character founded on “educational, formative, integral, participative and democratic” knowledge, after considering that the education proposal presented by the federal government “has turned out to be unsuccessful,” because in a period of four years the policy for the sector turned into a conflict that not only has affected public education, but also changed diverse ambits of national life.

Education, a mission of the State

In the Convention Center of the 21st Century Medical Center, UNAM’s professor emeritus Adolfo Gilly emphasized that primary and secondary education for all of the population is a “mission of the State and an obligation of those who govern.” He asserted that formation is not an “industry with capital, is not a business or a banking and financial system. Therefore, education cannot be in the hands of Televisa and of those who manage it.”

After recognizing the teachers struggle and the effort of thousands of teachers that have stayed outdoors in the occupations, who have suffered prison or have lost their lives for the teachers’ struggle, he lamented that: “all that is necessary so that we may be here today.”

He reminded that education is also the emotional and social link that is created between students and teacher, because “feelings of fraternity, solidarity, liberty and equality are experienced in the classroom. We learned that in the Normal School, which is under fire.”

He asserted that there is no evaluation that can measure the many roles that teachers fulfill, who, he said, “cover absences, teach with their attitude, their life and their knowledge (…) the school must be the education place, but it also doubles as a home. What evaluation is going to measure that?”

In that regard, González Casanova, in his speech titled Towards the education that the Mexican nation needs, warned that if they want the negotiations to be successful for the general interest, for the youth, the workers and the peoples, they confront two complex elements: the rights of the teachers as workers, and who educates, about what and how it’s done.

Therefore, he considered indispensable presenting a proposal where se prepare children and youth to have a general scientific and humanist culture, in which impelling moral values and truth are determinative.

“The project would have to specify without equivocation what is understood by these values. The ethics of struggle, of cooperation, of the defense of the general interest versus individualism, consumerism and private interests is understood as the central value of education. And in truth a permanent critique of the culture of servitude is understood, as well as a constant questioning of what one believes has happened.”

He added that it’s necessary to resort to the teachers’ colleges for middle school and universities where formative themes are broached, for the purpose of generating an updating program (continuing education?) in the teaching of the sciences, humanities, arts and technology, which permits the 1.5 million teachers to continue their formation “without any kind of pressure.”

At the same time, he said, a “profound project” could be elaborated with the reform of education through work commissions in which teachers and specialists participate.

Nevertheless, he detailed that it’s also necessary to guaranty the teachers’ respect and dignity, the defense of their labor rights and to promote a humanist, scientific, artistic and technological culture, “and not only the apologetics of the world and system in which we live, but rather the critique and creator of a better world, just, free and democratic.”

← CNTE Chiapas: “The state sets the stage for repressing the teachers”
Tribunal orders the return of María Gloria as mayor of Oxchuc →