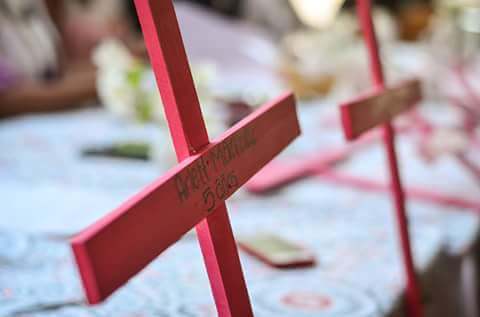 The August 14 page of Desinformémonos warned about the 31 femicides registered in Querétaro since January 2015, with a short and frightening story.

“The games, dreams, school, friends, family, birthdays, trips, security, freedom, dignity and life have stopped being rights because of being converted, shamefully, intolerably and lamentably into benefits that are acquired when ‘you moderate’ your manner of speaking, when ‘you are careful’ of how you look, the hours in which you go out, the places that you frequent, when you stop confiding in people and when your life stops being your life.”

The article emphasizes that: “femicides are clearly State violence;” it denounces “the impunity that covers them and favors the repetition of harm,” and it emphasizes that the majority of the victims are usually indigenous and poor women.

The information refers directly to Silvia Federici’s book, Calibán y la bruja: mujeres, cuerpo y acumulación originaria (Traficantes de Sueños, 2010); [1] a work of lasting influence, which contributes to illuminate reality permitting a better comprehension of a social conflict. It analyzes the witch-hunts in medieval society, and at the same time contributes to the comprehension of what happens in this period of history.

Federici maintains that feudalism was eroded due to the power and autonomy obtained by the popular classes, and that the response of the dominant classes was a violent offensive that seated the bases of capitalism: slavery and colonialism, the subjection of workers in production and the confinement of women in reproduction, the creation of hierarchies of race, gender and age, formed part of this new domination.

Capitalism not only arrived “dripping blood and dirt from head to foot” (Marx), but also creating “an immense concentration camp,” where slavery on the plantations and the mita [2] in the mines impelled capital accumulation (Federici, p. 91). The power of women was destroyed with witch-hunts, and the males (and the women, boys and girls) were subjected by means of salaried slavery and slavery, for appropriating the commons.

Today we cross through the crisis of capitalism and the dominant class again uses violence to perpetuate it. At the basis of this crisis is the power acquired by the popular sectors organized into movements, particularly since the 1960s, when factory workers disarticulated the employers’ power by overthrow Fordist (assembly line) discipline.

The capital offensive underway seeks to destroy that capacity for organization and struggle of those below. But the popular world is now very different than before, particularly because of the crisis of the old patriarchy.

Anyone who knows the antisystemic movements knows that women play a central role, even when they aren’t as visible as the men. They are the mortar of collective life; they are in charge of the reproduction of life and of the movements. Besides cooking, weaving and caring for the animals on their homes, they get together with other women to do the same thing, but collectively. They are the guardians of the commons, material and immaterial.

They, and their sons and daughters, are the sustainers of the popular world, of extended families and of the organizations, from urban to campesino and indigenous communities, from Chiapas and Cherán to Wall Mapu (Mapuche Territory) and the Andes. It’s no accident that we are facing a new witch-hunt when reproduction occupies such an important place in the resistance and in the power of women within their communities.

Women, and their sons and daughters, have disarticulated the nuclear patriarchal family, the power of the Church and the priest, the disciplinary role of the school, the barracks, the hospital and the workshop. They have created a world where collective relations prevail over family relations and the cooperation among them makes that “the sexual division of labor” is “a source of power and protection for women,” as Federici writes about medieval society (p. 41). Paying attention to what happens in a tianguis (outdoor market), an outdoor cafe or a popular barrio makes further comment unnecessary.

The violence to annihilate the popular sectors, through the narco, the femicide and the wars against the peoples, has been designed by the dominant classes to destroy our powers; not only the explicit ones. Federici reminds us that the workers of the 15th Century practiced multiple resistances: they stopped working when they had enough, they only accepted tasks for a limited time, and dressed ostentatiously, in such a way that they were “indistinguishable from the lords” (p. 78).

The new witch-hunt, now without trials or formalities, but rather a clean bullet, is part of capital’s Fourth World War to eliminate us as peoples. To triumph in the class struggle, the bourgeoisie must raze the autonomy of the peoples, of the communities and of the individuals; violence and social policies are, in that sense, complementary. The attack on women and their children is one of the crucial points of this war.

As in the dawn of the system, violence is again the principal agent of capital accumulation in its decadence. Far from any illusion, we must comprehend that the violence is neither an error nor a momentary deviation, but rather a systemic characteristic of capitalism in decadence, particularly in the zones where the dignity of human beings is not recognized.

For that reason, she urges clarifying strategies for confronting the systemic violence and the will to annihilate the peoples. If the femicide and the indiscriminate murder of young people and women are systemic, what sense does it make to elect governments from different parties that are going to maintain the standing system?

[2] According to Wikipedia, mit’a, a Quechua word, meant collective free labor on public works required by the Inca Empire. After the Spanish invaded, the word became mita and the practice became an oppressive system. With respect to the mines, workers were paid very low wages, with which they had to buy their food (from company stores, of course) and pay taxes. They earned so little that they were often unable to pay their debts and were, therefore, not permitted to leave the mines and go home.

← CNTE Mega-march in Tuxtla
CNTE Chiapas: “The state sets the stage for repressing the teachers” →