Violent eviction of the CNTE from Chiapas occupation

[The EZLN has issued a statement on this violent eviction. We’ll post it as soon as the English translation is available. Meanwhile, here’s what happened.]

VIOLENT EVICTION of the CNTE OCCUPATION in CHIAPAS; THEY REINFORCE IT AT NIGHT 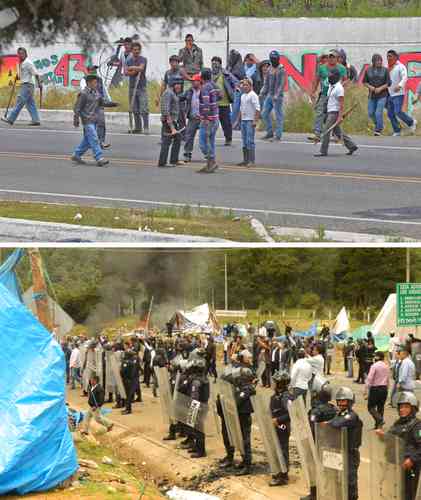 Some 200 individuals violently evicted the occupation that CNTE teachers maintained on the San Cristóbal de Las Casas-Tuxtla Gutiérrez toll road, along with parents and members of civil groups that support the teachers. Photo: Colectivo Tragameluz and Elio Henríquez

By: Elio Henríquez and Hermann Bellinghausen

Yesterday (Wednesday) noon, around 200 people that were carrying sticks, machetes and firearms attacked the roadblock that teachers, students, parents, representatives of more than 50 of the city’s neighborhoods and members of different organizations have maintained on the San Cristóbal-Tuxtla Gutiérrez toll road since June 27, to demand the abrogation of the education reform.

Accompanied by municipal and states police, the aggressors knocked over the tarps and tents, destroyed them with kicks and machetes, and set them on fire, while the forces of law and order surrounded them to let them finish their action.

During the attack the primary school teacher Romualdo Guadalupe Urbina received a clavicle injury from a 22-caliber bullet. Another participant in the roadblock was run over and suffered a fractured tibia and fibula.

Both were confined in the clinic of the Institute of Security and Social Services for State Workers, while neighbors in the barrio where it is located blocked the Santa Martha Bridge and the access streets “to protect the injured.”

The aggressors, allied with the PVEM

Several dozen pro-government people from San Juan Chamula perpetrated the aggression, as well as more than a hundred indigenous settled in San Cristóbal. Some teachers pointed them out as part of the Traditional Markets Tenants Association of Chiapas (Almetrach), which Narciso Ruiz Sántiz heads and that in in previous days had already threatened to attack the roadblock. These groups are identified with the Green Ecologist Party of Mexico (PVEM), which governs both municipios (San Cristóbal and Chamula).Teachers and parents did not respond, but rather withdrew to the central park to re-group.

The violent eviction began at 12:30 pm. Carrying a few small signs and brandishing sticks, machetes and stones, the attackers arrived asserting that they came “peacefully,” only to immediately attack the roadblock’s installations and remove the tree trunks, tires, rocks and other obstacles.

A heavy truck and several small trucks of state and municipal police sounding their sirens came behind them. The police agents did not participate directly in the eviction; they just protected the indigenous individuals that destroyed and burned tarps and tents.

Some of the assailants attacked Dolores Rodríguez, a reporter from Noticiero en Redes (Network News?), “for taking photographs.” One of the aggressors pointed a pistol at her head. Another one threw big firecrackers in a horizontal trajectory towards the forest.

Police agents withdrew a little later and the place stayed under the control of the aggressors, who Adalberto Hernández Rabanales, leader of Section 7 in Los Altos, classified as a “shock group;” he also placed responsibility for the acts on the three levels of government.

When local police withdrew, teachers and members of civil organizations re-grouped one hundred meters further ahead, near the Hospital of the Cultures, and the masked men shot at them when they tried to return to rescue the vehicles. That’s when Urbina Estrada, a teacher in San Andrés Larráinzar, was injured.

Afterwards six patrol cars arrived from the Federal Police (PF). La burning and destruction of the encampment continued while the police watched. The action concluded at 3 o’clock in the afternoon exactly, when the contingents of masked indigenous men abandoned the spot at kilometer 47 of the highway to Tuxtla Gutiérrez.

The group from San Juan Chamula boarded a Cristóbal Colón bus and the larger group marched in formation returning to the city. The place remained under the charge of three PF patrols until 16 hours, when dozens of neighbors from the southern part of San Cristóbal returned with sticks and stones that they threw at the police patrols.

The police drew away in the vehicles and stopped one kilometer ahead. The roadblock was re-established in a matter of minutes. More people continued arriving in the evening. They extended the obstruction of streets with bonfires, tree trunks and iron. Once again there are several hundred parents, teachers and neighbors from the different barrios in an atmosphere of excited tension.

In the afternoon, in the central park, Hernández Rabanales said that since early “there were rumors that the people from Chamula would evict us, but compañeros from social organizations told us that they were in communication with government agencies and they told them that the Chamulas were on the way to an activity in Tuxtla Gutiérrez.”

In an interview with La Jornada, the teachers’ leader added: “It seems that the idea was to provoke a break in the dialogue, because since yesterday the negotiating committee said that it had no chance to talk because the government was only trying to impose.”

In the afternoon, the teachers marched in the center of town while in the park a group of masked youths set fire to the wooden doors of the old municipal presidency (that is being arranged as a museum) and entered the building, breaking all the windows. Smoke was coming out of some windows.

Meanwhile, unidentified masked indigenous men, unrelated to the organizations that support the teachers, looted an Oxxo [1] located a half block from the ex mayor’s office. They distributed cigarettes, drinks and other products to lumpen children and youth in a relaxation plan.

In the state government’s version, the police went to “dissuasively dislodge in order to avoid a confrontation between San Juan Chamula residents and CNTE demonstrators.”

In a comunicado, the state maintains that faced with an alert the C4i [2] issued, and because it pointed to the presence of Chamula inhabitants at kilometer 46 of said road, blocked by CNTE members, they sent 200 members of the police to guard the integrity of the citizens, thereby avoiding any motive for confrontation.”

Police and the attackers arrived at the events together. According to the government’s version, the indigenous went to “dialogue peacefully and to request the free transit of citizens, businesspeople and transport drivers,” because of which “the demonstrators opted for withdrawing from the place voluntarily” and “the roadway was opened.”

The coleto [3] mayor, Marco Antonio Cancino González, set himself apart from any responsibility in the midday eviction.

[1] OXXO stores are similar to 7 Elevens or a gas station with a mini-mart.

[2] C4i is the abbreviation for the State Center of Control, Command, Communication, Computation and Intelligence.

[3] A coleto is a male resident of San Cristóbal that claims to descend directly from the Spanish invaders.

← In Chiapas, thousands march in support of the CNTE
EZLN: Open letter on the San Cristóbal attacks →