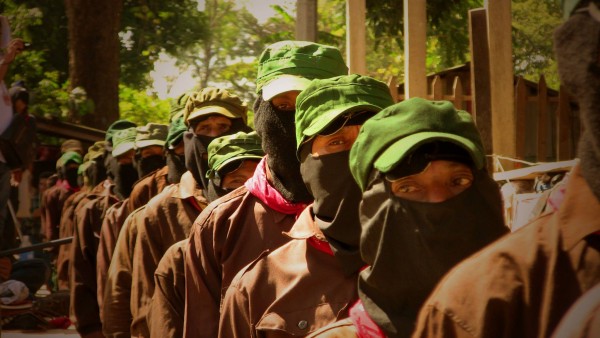 To the Artist participants in the CompArte:

Receive our greetings.  We write you to communicate the following:

We want in some way to let you know and feel, all the artists that committed to participate in the CompArte, not just our admiration and respect.  Also and above all, our conviction that the current dark hours, and those that will come, require your occupation and creativity for finding the path that, like humanity, we want, we need and we deserve.

And when we speak of darkness, not only do we refer to the horror that leaps out and destroys at any point of the already suffering world geography.  We also refer to the political and economic commercialism that, mostly without importance to the deaths and afflictions, is launched over the still warm cadavers of the victims, and tries to extract profit and advantage.

If the machine imposes this perverse logic in which each pain doesn’t anger but rather waterproofs, perhaps the Arts can be those who remind humanity that it not only destroys and kills the person, it imposes and subjects, scorns and forgets. It is also capable of creating, liberating and remembering.  Don’t life and freedom beat even in the most sorrowful and bloodcurdling artistic creations?

That’s good, we think, we feel, we believe, as the Zapatistas that we are, that there are artists that will know how to extract, from the most profound of the most obscure calendar, a light for humanity.

If not now, then when?

We don’t want to make them feel that they owe something to anyone, or submission, or pursuit, or absoluteness.  We don’t seek their votes or their vetoes.  We just want to say to them that, in that world that we catch sight of from the crow’s nest, we look at them.  Or better still, we look at their creations.

That’s what we think.  Nevertheless, we see that our ideas and sentiments don’t even begin to cover it with these words.

It’s because of this the Zapatistas silently persist in a new effort that we now want to communicate:

We want to greet you and honor you as what you are.  Not as activists in the causes that people the world with different colors and symbols, but as the step in which we anticipate a more human, more dignified, a better tomorrow.

We Zapatistas don’t gaze towards above.

We only raise our eyes, our ears in front of the sciences and the arts.  And fear and obedience don’t lift our view that way.  It’s the portent of knowledge; it’s the marvel of the arts.

Therefore, we have organized ourselves to present a very squeezed version of what our work for the CompArte has been. This is with the sole purpose of trying to make you feel how great you are to us, the Zapatistas.

We know that the compas of the Sixth and part of the artistic community of Chiapas, with the on-going commitment of the compas of the CIDECI, have moved forward with the organization of the CompArte in the CIDECI to be celebrated in its space, from July 23 to 30, 2016.  We truly expect that celebration to be a brilliant as is your artistic work and that, in these calendars of dark despair, in that corner of the world breathes another air and it’s not the night from above that reigns.  That, although it may be in the fugacity of a musical piece, a trace of paint, a dance step, a photogram, a line from a dialogue, a verse, a whatever, the hour of the police is defeated, and in a second at least the possibility of another world breathes.

Then, taking advantage of the fact that some of you (no all, for sure) will be creating at CIDECI during those dates, we want to invite you (invitarlas, invitarlos, invitarloas) participants and attendees, to the Caracol of Oventik on July 29, 2016.  From 10 am and until at least 7 pm (national time) we will be presenting theater, dances, music, poetry, painting, thoughts, and perhaps even predictions.  Although it will only be a small part of what was prepared in the towns for the CompArte, the 5 caracoles that support the Tzotzil, Chol, Tzeltal, Tojolabal, Zoque, Mam and mestizo Zapatista peoples will be present.  Even with the haste, the Zapatista compas, have prepared to celebrate, in your honor, life and liberty.

It will no longer be everything that was prepared on our part, but it will not be something minor: a present that we want to give you.  We hope you like it, or not so suddenly.  But we are sure that you will find here sounds, colors, lights and shades that have no other aspiration than to make you listen, watch and feel the “gracias” with which we embrace you.

The Zapatista artists make their presentation on July 29 and on July 30 they return to their communities, unless, of course, someone invites them to be at the last day of the CompArte Festival in the CIDECI. In such a case, they will make a stopover at CIDECI to learn something from you.

So now you know:

The geography?  The Caracol of Oventik.

Maybe it will rain, maybe not.  Perhaps it’s cold, perhaps not, but we’re here, we will be here.

Because this corner of the world, where it falls to us to resist and fight, is only our temporary house.

Our great house, in the morning and asleep, has been, is, and will be the world that we will create with others.

We await you here.

Of course we always await you.

And although you cannot come, receive our biggest hug, which we give you…

From the mountains of the Mexican Southeast,

← For la Maestra, with affection
In Chiapas, thousands march in support of the CNTE →