The participation of urban and rural civil society is giving the teachers’ protest broader content. It’s no longer about actions against the education reform, as the contingents that follow the teachers proclaim; it’s about a “resistance to all the structural reforms that harm the peoples without their consent,” according to what a handwritten banner reads in a contingent from the Tojolabal zone. 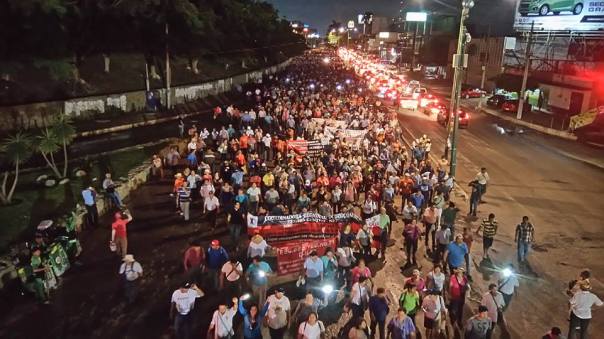 A view of the Mega-March in Tuxtla. Photo: Pozol Colectivo.

A demonstration more of strength from the National Coordinator of Education Workers (CNTE), the mega-march held this afternoon through the Chiapas capital’s principal avenue was to say: “No more talks that lead nowhere. We want resolution of our demands,” maintained José Luis Escobar Pérez, state spokesperson for the Coordinator at the start of the demonstration. “In case it doesn’t go that way, a plan of forceful actions of greater intensity has been designed.

Escobar Pérez, a member of Section 7 of the National Education Workers Union (SNTE), wearing a marine blue shirt with “Ya basta” in red, and covering his chest with the famous photo of Subcomandante Marcos giving the finger, said to the communications media that the roadblocks “are only in recess and can be re-installed at any moment.”

Before beginning the long twilight walk from the western part of Tuxtla Gutiérrez, thousands of teachers met under the shade from the trees. They come from practically all the state’s regions: the borders, the jungles, the cities of Comitán, Tapachula, Cintalapa, the Northern Zone, Bachajón, Las Margaritas, the Sierra and the Coast.

Their permanent occupation fills ten blocks of Avenida Central and blocks the government palace, silent and with passage obstructed. Hundreds of rows of plastic and canvas with the banners of the Sections and regions sit over the sidewalks, the plaza and the atrium of the San Marcos Cathedral.

The teachers’ spokesperson reiterated the demands of the mega-march: ‘‘Revocation of Articles 3 and 73 of the reformed Constitution; realization of forums and consultations that permit designing an education model that permits the people’s participation.”

In third place, “compensate for the damages from the deceptively named education reform;” that is, pressures, firings and docked wages. ‘‘We are willing to continue the blockages during the whole vacation period,” Escobar Pérez answered reporters.

To the chant of “it’s seen, it’s noted, in Chiapas there’s no defeat,” Sections 7 and 40 of the teachers’ union marched at the front. Later, the workers of Higher Education, followed by students, parents and diverse social organizations.

It’s been a long time since we’ve seen a confluence so full of independent Chiapas organizations; especially if one adds the explicit and in kind support that the teachers’ movement received this weekend from the Good Government Juntas in the Zapatista Caracoles, and with pronouncements of Las Abejas, Xi’Nich, Pudee and other organizations.

There was also support from the barrios and colonies in the cities, especially San Cristóbal de las Casas, the only place now where parents and villagers continue blocking a highway.

The participation of urban and rural civil society is giving the teachers’ protest broader content. It’s no longer about actions against the education reform, as the contingents that follow the teachers proclaim; it’s about a “resistance to all the structural reforms that harm the peoples without their consent,” according to what a handwritten banner reads in a contingent from Tojolabal zone.

Now the teachers speak to worldwide public opinion, especially on Latin America, as Escobar Pérez made clear: “The assault against the Mexican teachers is the same all over the world. We are at a time to make an organization without borders to stop it. We didn’t put up those borders,” he concludes. They have no importance when it’s about uniting the peoples.

The tens of thousands of teachers from all the regions of Chiapas that walk this Monday from the exit for Mexico City –the place they call La Pochota, although the tree with that name disappeared some time ago– endure the sun and rain la in the direction of the center, whose principal artery they have kept occupied for almost two months.

They maintain, as at the beginning, their rejection of “the punitive evaluation and educational degradation to favor its privatization.” They struggle against the end of public education.

And they march “with tired feet,” with continuous stops, “to hope that the government sits down to negotiate with the teachers’ demands.”

← CompArte is happening at CIDECI
For la Maestra, with affection →