A dialogue with the smell of ’68

After the bloody eviction in Nochixtlán, the federal government started to dialogue with the CNTE. However, it refuses to consider the teachers’ principal demand, which is abrogating the education reform. On the other hand, it began to issue a threat in the voice of the principal bishops of the regime: if the teachers do not become peaceful, the force of the State will be unleashed against them. Osorio Chong said: “Time has run out.” And last week the Chiapas governor, Manuel Velasco, repeated (badly) the words that Gustavo Díaz Ordaz pronounced just before the Tlatelolco Massacre: “We have been tolerant of censurable excesses.”

The tone reached its highest point on Friday afternoon, July 1, when Osorio Chong announced, with a severe tone, the coming eviction of the roadblocks that the CNTE maintains in several points of the country, above all in Chiapas and Oaxaca. In the less than five minutes that the brief message lasted, the functionary warned on two occasions that: “time has run out.” Proceso.com July 2, 2016

On July 2, the Fray Bartolomé de las Casas Human Rights Center in Chiapas issued an urgent action facing the threat of violent eviction of protesting teachers from the roadblocks and actions of a “shock” group that infiltrates those roadblocks. http://frayba.org.mx/archivo/acciones_urgentes/160702_au_03_cnte.pdf

Also on July 2, the CNTE met with social organizations in Chiapas and formed a popular movement against the “fascist” government in defense of public education (abrogation of the education reform), territory, natural resources, indigenous rights and culture, health, human rights, the countryside and sustainable development. (See banner above)

Las Abejas march in support of teachers in Chiapas.

On July 1, thousands of Catholics from at least 20 parishes of the San Cristóbal Diocese held a march –the third in less than a month– in Tuxtla Gutiérrez to express their support for the teachers that have been on strike since May 15 to demand the abrogation of the education reform and to demand that the Secretary of Governance, Miguel Angel Osorio Chong, maintain a table for dialogue with the National Coordinator of Education Workers (CNTE, its initials in Spanish).

The parish priest of Simojovel, Marcelo Pérez Pérez calculated that “between 20,000 to 25,000 personas” participated. He stated that the marchers not only ask for the repeal of the education reform, but also of all the other reforms because “they only benefit the big corporations.” Pueblo Creyente of Simojovel warned that: “the way things are going more repression and evictions by federal and state police are predicted.” http://www.jornada.unam.mx/2016/07/02/politica/004n1pol 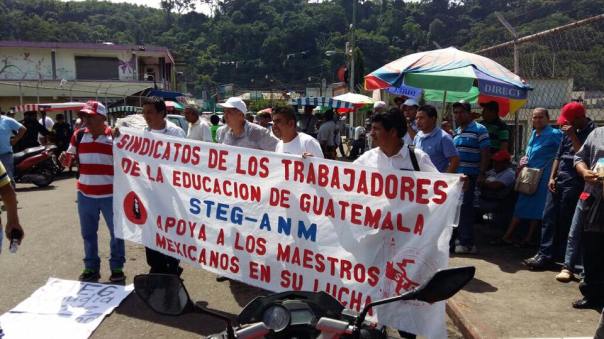 Guatemalan teachers demonstrate on the border with Mexico in support of the CNTE.

While Catholics were marching in Chiapas, members of the Guatemalan Education Workers Union (STEG) arrived at the three main border crossings with Mexico to demonstrate their support for the CNTE and briefly block them while announcing their solidarity with Mexican teachers.

Doctors and nurses march with the teachers

On June 22, thousands of doctors, nurses and other workers from the health sector in Chiapas went into the streets of Tuxtla, Tapachula, Palenque, Tonalá and San Cristóbal de Las Casas to show their support for the National Coordinator of Education Workers (CNTE) and to reject the labor reform and the reform in matters of public health that the federal government impels.

Compiled by the Chiapas Support Committee