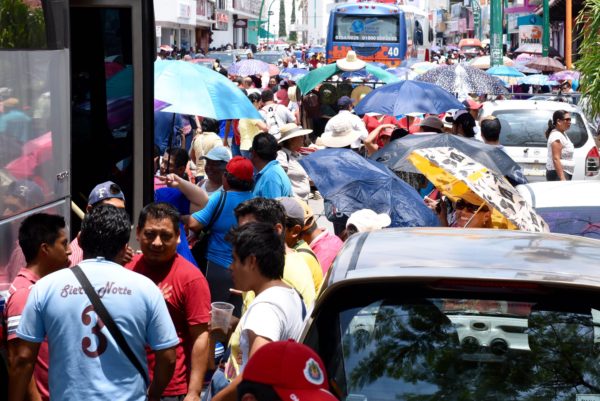 Aboard 32 buses and dozens of private automobiles, a first contingent of teachers from the National Coordinator Educación Workers (CNTE) departed today headed to Mexico City, where they will add themselves to the protest actions that have the objective of demanding that the federal government open a dialogue table about the education reform.

The departure of the contingent of teachers takes place upon completing one month from the start of the demonstrations of the CNTE teachers of the CNTE in Chiapas, which groups together members of Sections 7 and 40 of the National Union of Education Workers (SNTE).

In this month of protests that started with the installation of an encampment in the central plaza of the state capital, they have added the support of parents, students and university academics, social organizations, independent citizens and those who in the indigenous zone of Chiapas belong to the Diocese of San Cristóbal.

In the last two weeks, the Secretariat of Education in Chiapas has not announced the number of teachers that participate in the labor strike that started last May 15. The leaders of the CNTE, for their part, maintain that those on strike in Chiapas are 97 percent of the union members of Section 7 of the SNTE, and 90 percent of Section 40, which adds up to more than 60,000 teachers.

Sonia Rincón Chanona, state’s Secretary of Education, asserted last June 10 that upon completing one month of the strike, they run the risk of losing the 2015-2016 school cycle.

Nevertheless today the leader of the Coordinator, Pedro Gómez Bámaca, announced that in an agreement with the parents, at the time the strike started the teachers in the schools had completed 80 percent of the study program that the SEP frames.

“Before the movement erupted, we mounted the students’ qualifications on the platforms–a little more than 3 million taking courses in basic and middle school education media superior- and therefore the school cycle can be considered concluded in accordance with law and without affecting the students. If the Secretariat of Education invalidates the prior months’ work, that will be their responsibility,” he warned.

In a press conference, before thousands of teachers departed for Mexico City, the Coordinator’s leaders explained that the epicenter of the teachers’ mobilizations would be in the country’s capital. Parallel demonstrations will continue in Chiapas and the rest of the states.

“The agreement of the national assembly is that 20 percent of the mobilized teachers will concentrate in Mexico City. Chiapas will send 10,000. The first contingent leaves today and the rest in subsequent days,” Gómez Bámaca detailed.

Observers from the National Human Rights Commission (CNDH) accompany the teachers; the CNTE invited them to give an account of their events and demonstrations, in order to document the actions of the teachers and of the State forces.

“We want the national and international human rights organisms to document that we are not committing any action that violates the human rights of other people. We are exercising our right to demonstrate peacefully, and those who have committed abuses –among them the attack on teachers in the city of Comitán- are not us but rather individuals and organizations that have infiltrated with the clear intention of destabilizing,” he assured.

At the moment in which the buses of teachers were preparing to begin their journey, the demonstrators retained a person that said his name was Roberto García, and said he was assigned to the Municipal Police of the Chiapas capital.

Upon saying that to the teachers, this person, who was wearing civilian clothes was photographing and recording the demonstrators. The teachers took the retained man to the kiosk where the leadership gathered, and there the reporters asked him if he was really spying on the teachers. This person said yes he was, and that someone about whom he gave no references contracted him for that. The teachers delivered the person retained to visitors from the CNDH.

Regarding the announcement of the head of the SEP, Aurelio Nuño, about the audit that he was going to make of the list of names of teachers in the states, Gómez Bámaca said that the CNTE was disposed to any audit, including an audit of the union’s accounts.