Zibechi: Reflections on the Brazilian Crisis

Posted on May 2, 2016 by Chiapas Support Committee 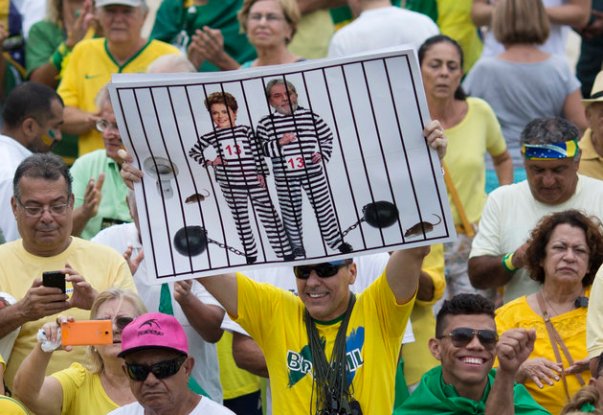 In this March 13, 2016 photo, a demonstrator holds a poster with the photo of Brazilian President Dilma Rousseff and former President Luiz Inacio Lula da Silva in prison stripes during a protest on Copacabana beach in Rio de Janeiro, Brazil. (AP Photo/Silvia Izquierdo, File)

A relatively short time ago, the dominant classes of the world decided to unleash a war against the peoples in order to keep themselves in power in a period of acute change. They decided that democracies are an obstacle to unleashing that war, and they need, in whatever way, to neutralize them, put them at their service, as well as those elected to govern. On this point they don’t permit the least fissure.

To deduce the strategic thinking of those above one must put themselves in their place, since they don’t usually formulate it openly. We must ask ourselves what we would do if we were part of the one percent that has assured domination.

The first response is that there are too many people in the world and that the planet doesn’t allow that much population if they all want to live, not like the 1% lives now, but, for example, at a level of the 20-30% of higher incomes. The world designed for the domination of the 1% barely tolerates half of the planet’s current population. The rest are unnecessary and no longer even count as producers of surplus value, because the system accumulates by stealing. The question is what policies are derived from this fact.

The second is that the 1% abandoned the Welfare State (or similar substitutes like those that we had in Latin America) and it doesn’t enter into their plans to revive it. Therefore, the democracies we know are no longer necessary or useful for the kind of political systems facilitating accumulation by dispossession/plunder/robbery that we are suffering. The increasing militarization of the poor zones occupies their place, like in the urban peripheries and all those spaces that the big multinationals colonize, displacing entire peoples.

Of course, the 1% swears fidelity to democracy and its values, because it must create the illusion in a good part of those below about the importance of the vote and the party system. But, on top of that, it requires a rogues’ nest of individuals that perform as representatives and that act as intermediaries between them and the rest of the population. As Immanuel Wallerstein points out, domination is stable when it is established in three parts (classes) and is unstable when there are only two. The intermediate sectors are keys to the system: from the middle classes to the academics, along with the politicians and the big communications media.

As a consequence, occupying the higher rungs of the state apparatus supposes administering the current model of accumulation/war against the peoples. And, by the way, it’s useful to remember one of the principal lessons that the progressive governments leave us: given the current correlation of forces on a global scale, the governments are limited to administering extractivism, diverting (in the best of cases) resources to the popular sectors without touching the basis of the model.

The third big objective of the 1% is to neutralize all movements of resistance against it, from the leftist and progressive parties to the anti-systemic movements. Although in previous periods negotiating with unions predominated and it tolerated the social democratic lefts occupying government positions, in the new stage we live in it seems necessary to close ranks and avoid diversions in its plans and projects to keep those below at bay.

When parties or individuals arrive in government that –because of their trajectory or stated objectives– can depart from the extractive script, they create the conditions for neutralizing them. That happens in two ways. One is domestication, by inserting the new rulers into the elites, something that is not very difficult to attain, since the system possesses numerous ways to co-opt/buy off those who resist it. The other is the removal of rulers, in any way possible without appealing to classic State coups, but rather to legal, although illegitimate means.

These days in Brazil we can see a combination of both strategies. First it was domesticated, and then removed. The PT governed twelve years allied with super exploitive Brazilian multinationals (like the big construction companies), which financed its electoral campaigns, its leaders travel and numerous soft jobs.

Social policies are applied to the movements that seek to pacify those below with small monetary transfers that impact the poverty, but not the inequality, and avoid the realization of structural reforms. The PT delivered less land to the campesinos than the neoliberal government of Fernando Henrique Cardoso because it prioritized an alliance with the agribusiness that occupies now the Agriculture Ministry.

What should the strategies of the anti-systemic movements be in view of this panorama and in light of the experiences of the last 15 years?

In the first place, thinking long term. The few forces that we have should be used strategically, not for momentary and timely gain. If we conclude that we suffer a war against those below, we must think about how to eat away at the system and avoid that it eat away at us. It’s evident that the progressive cycle didn’t consume them, but it weakened the movements.

The second is the conviction that the worst path we can take is to administer the difficulties of the system. I have no doubt that at some time it will be necessary to aim at the State (to take it over or destroy it, depending on the different positions existing among us); but, while the system may be strong, the government is synonymous with managing accumulation by dispossession, or the war against the peoples.

I believe that the greatest strategic urgency lies in comprehending the extractive model of dispossession. In that we have committed gross errors (starting with the one who writes), since we have barely emphasized its environmental problems and we have broached it from the economy and not from the political. If we are really facing a war, administering any aspects of the concentration camp is not the best path, because it must be destroyed, since it cannot be reformed.

← Esteva: Inside Out
The GIEI’s Tsunami →