MEMBERS of the NATIONAL INDIGENOUS CONGRESS ARE IN SOLIDARITY with AYOTZINAPA 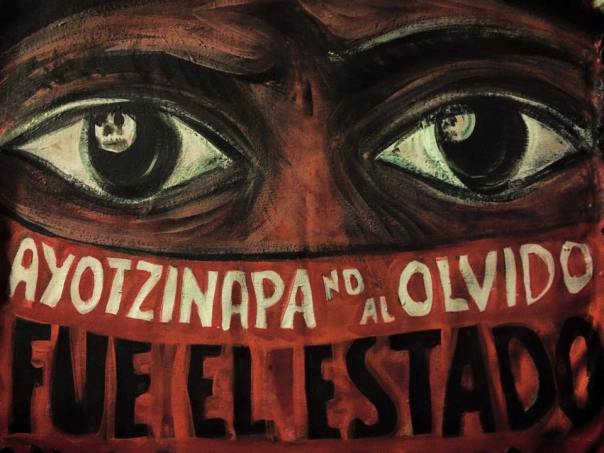 “The Other Justice always has to be Memory and Not Oblivion,” the adherents to the Sixth stated. At the same time they pointed out that: “the intellectual authors of the crime against the normalistas are: José Luis Abarca, the former Iguala mayor; Angel Aguirre Rivero, ex Governor of Guerrero; Enrique Peña Nieto, president of Mexico; the Mexican Army and the Iguala Municipal Police.” “Ayotzinapa is the continuation of the rage, of the Hydra’s fire,” they abounded.

For its part the Autonomous Council of the Chiapas Coast, also a CNI member, mobilized in solidarity with Ayotzinapa, through a march in Pijijiapan, Chiapas, together with the teachers movement and social organizations in solidarity. At the end of the march, during the meeting in the coastal community’s central park, the different speakers demanded: “the presentation with life of the 43 normalistas as well as the fulfillment of the eight demand presented to Peña Nieto by the families of the 43 disappeared”

CNI communities of Chiapas, like the Tila Ejido, Candelaria el Alto, Cruztón, San Francisco Teopisca and adherents to the Sixth headed to Mexico City, in order to participate in the march for the one-year anniversary of the enforced disappearance of the normalistas of Guerrero.

On the other hand, the San Sebastián Bachajón Ejido of Chilón, Chiapas, also a CNI member, stated in a comunicado all its “scorn and rage at the narco-government, for all the suffering and pain that it generates for the families of the 43 disappeared compañeros and for the entire world.” In the same vein the Indigenous Tzeltals expressed that on the one-year anniversary of the students’ disappearance: “together and united we will construct a new path and we need to continue adding to our struggle to construct a new world and spaces of freedom.”

In Mexico City contingents of the National Indigenous Congress from different parts of the country, adherents to the Sixth Declaration of the Lacandón Jungle and members of the Network against Repression and for Solidarity, marched together with family members of the Ayotzinapa students and diverse sectors of society in solidarity.

Adherents and sympathizers of the Sixth also demonstrated in San Cristóbal de las Casas “To make the Ayotzinapa 43 present.” The displays of solidarity take place in the context of the mobilizations at the national and international level, demanding that the students are presented alive.

Translators’ Note: What seems important here, in addition to the solidarity with Ayotzinapa, is that indigenous communities in Chiapas adhered to the Sixth Declaration appear to be consolidated through membership in the National Indigenous Congress. This is not the first indication of consolidation; however, it’s important to understand in light of the EZLN’s emphasis on “getting organized.”

← EZLN mobilizes in solidarity with Ayotzinapa
Housing is a human right! →