Wallerstein: Elections can minimize the damage from the right

Elections can minimize the damage that the right inflicts, Immanuel Wallerstein says 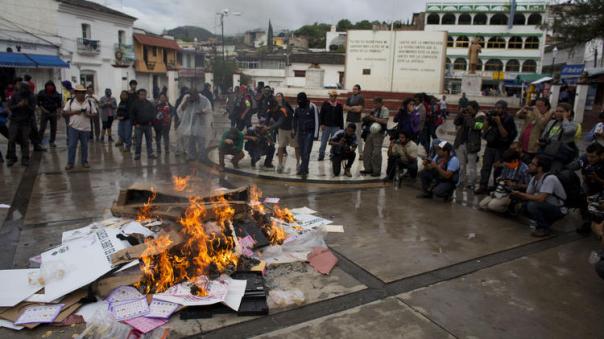 People burned ballots in Tixtla, Guerrero (above) and in other states prior to Mexico’s midterm elections last Sunday, June 7. The PRI benefitted from the decline of the PRD.

The United States sociologist and historian, Immanuel Wallerstein, asserted that one must “use electoral tactics defensively” and although “it’s clear that victories” in the elections “don’t transform the world, it’s also true that they must not be underrated because they can be an essential mechanism for protecting the immediate needs of populations all over the world against the loss of benefits already acquired.”

Those “electoral battles,” he said, “must be developed within the logic of minimizing the damage that the global right is still able to inflict by means of control of the governments of the whole planet.”

In a position paper that he sent in writing to the seminar titled Critical thought versus the capitalist hydra, organized by the Zapatista National Liberation Army (EZLN), which was held in this city, he maintained that “we must not underrate this kind of battle because we all live and survive in the present and no movement can tell people that survival isn’t relevant in the short term.”

He clarified that it implies that “those electoral tactics be assumed exclusively as a pragmatic matter,” because “none of us ought to think that winning State power is a way of really transforming the world; but the decision about which is the lesser of the evils, must be analyzed case by case and moment by moment.”

In his paper titled “The anti-systemic movements and the future of capitalism,” read and translated by the social scientist Carlos Antonio Aguirre Rojas, investigator from the Autonomous National University of Mexico (UNAM), he said that: “this decision depends in large part on the electoral system with which we’re dealing. A system in which the winner takes it all must be confronted differently than a system in which two rounds (runoffs) exist or a system of proportional representation.”

Besides that, he added, “there are many different partisan or sub-partisan traditions inside the global left and although the majority of traditions are relics from a previous era, many people still continue voting according to these traditions.”

He emphasized: “Then, if state elections are only a pragmatic issue it is crucial to create alliances that respect these traditions seeking the 51 percent that, pragmatically speaking, counts a lot. But it’s very clear that we won’t ever jump for joy in the streets when we attain winning in these state elections, because the electoral victory nothing more than a simple defensive tactic.”

Considered one of the most important U.S. intellectuals on the left, Wallerstein recognized that individuals and movements exist that think that the electoral processes “are crucial,” but another part “considers that they are totally irrelevant.”

After asserting that one must “incessantly pressure towards greater democratization,” he stated that: “at least during the last two centuries, what movements on the left and the people have demanded most loudly from the States can be summed up in the word ‘more,’ in other words, more education, more health care, more income that guaranties a certain standard of living, and these demands not only are popular but also immediately useful in the everyday life of the majority of the people.”

He exposed that: “the conquest of ‘more’ also reduces the possibilities of the incessant accumulation of capital, because of which “these demands must be continuously maintained, because here the point of ‘too much’ will never be reached.”

The United States analyst asserted that: “although it’s clear that expanding all these functions of the ‘Welfare’ State will always pose questions about the efficiency in expenses, corruption or the creation of omnipotent or irresponsible bureaucracies, questions that we must resolve, that should not impede us from continuing with those basic demands for more, much more”.

In this sense, he emphasized, “it’s crucial that the popular movements facing governments of the center, center left, sometimes called progressive that they have participated in electing, not excuse them from the satisfaction of these demands for more health care, more education, more income, because the fact that they’re dealing with a friendly government and not with a government openly of the right, does not mean that we should lower our arms and stop fighting forever.”

He emphasized that: “if it’s very clear that they could come to present certain special circumstances in which we would have to ignore these affirmations, the general rules with respect to democratization are clearly those of always looking for more, for much more.”

At 84 years of age, Wallerstein also said that: “the anti-systemic movements now are found in the midst of a ferocious fight around what our future can be,” because the world capitalist system is in the “structural crisis” phase.

In his opinion, “a real parting of waters exists in the programs of the left parties and social movements of the whole world in the period that encompasses from the 1960s of the last century until today.”

In the 1960s, he indicated, the programs of the movements of the old left placed their emphasis on the change of the economic structures and up to a certain point on the socialization or nationalization of the means of production, but they said very little and at times nothing in regard to the inequalities that didn’t have a class foundation.

“On the other hand today, almost all those parties and movements or their respective heirs put forth proposals that refer to gender, race and ethnic inequalities. Many of those programs are terribly inadequate, but at least those movements now feel that it’s necessary to say something with respect to these inequalities.”

He stated that on the other hand, “virtually no party or movement exists today that considers itself as being on the left and that continues defending the socialization or the nationalization of the means of production and a large number of them are proposing to move towards other horizons. And this is a healthy turn that some salute and others reject but that the majority accepts.”

He considered that: “that from 1968 until today an enormous quantity of attempts have been accumulating to create alternative strategies proposed by different movements, old and new, which has also created a healthy change in the relationships that between them guard that group of different anti-systemic movements in the sense that the mutual denunciations and the vicious struggles of the past have been considerably abated, which is a positive development that I believe we have underestimated.”

2 Comments on “Wallerstein: Elections can minimize the damage from the right”