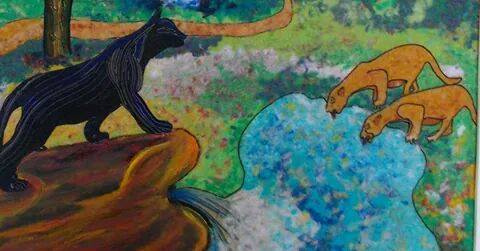 This painting was on display at the Festival in San Cristóbal: 2 Jaguars and a Black Panther.

The disappearance of a loved one is one of the worst evils that someone can suffer. It isn’t just the uncertainty that it provokes. It’s wondering every day if it won’t be happening to him what happened to many that have appeared, whose cadavers showed signs of savage and atrocious torture before being murdered. How to avoid desperation? How to confront serenely the mystery of evil, this overwhelming evil that pursues us?

In the last two years in Mexico one person disappears every two hours. Every two hours! We now have tens of thousands of families in that drama. There are many others whose loved ones were savagely murdered and millions of displaced. One third of the population has felt obliged to live outside of the country.

The family members of the Ayotzinapa students have permitted us to live together with them the drama that is profoundly moving and to experience at their side a form of response that isn’t sunk in desperation. They woke up millions, inside and outside the country. With surprising spirits, with as much courage as imagination, they don’t leave anyone at peace. They don’t want those that were asleep to go back to sleep, to return to indifference, to occupy oblivion, or those above to wash their hands.

Even the United Nations, with its hands and tongue tied by the structure and rules that define the organism, has had to react. The UN Committee against Enforced Disappearances not only just recognized formally that state of things. It has also criticized the Mexican government for the impunity that prevails in the face of those daily crimes and for not attributing the priority that is required to the search for the disappeared. It required investigating “all the state agents and organs that could have been involved, as well as exhausting all the lines of investigation.” The committee formulated a recommendation crucial to remembering the responsibility of the high commanders of those that commit the crimes.

A combination of blindness and cynicism persists in those who occupy the business of governing and in their friends and accomplices. Indifference, apathy or fear also persists in many people. Likewise, fervent adhesion to some charismatic leader and his cohorts persists, on the part of those that still believe that he could stop the horror first, and later follow the progressive path of other Latin American leaders. Although the discontent is more general all the time, even among the sponsors and beneficiaries of the current government, many don’t know what to do, others don’t consider the paths that don’t pass through the electoral exercise realistic, and still others are disposed to changing everything… so that nothing changes: may all those responsible for our drama be replaced; may they present sharp blows to the leaders and may there be a great clamor, but all that inside of the framework in effect, within the nation-State, representative democracy, the economic society, development, capitalism… They believe that it’s too illusory or dangerous to attempt anything else.

At the same time, the citizen mobilization expands and gathers strength and organic form. On February 5 two parallel initiatives got underway that on the path will be able to interlace for diverse longings. The agreement in their diagnosis of the current political crisis is impressive, although important differences are appreciated in the reaches and styles of their proposals. The two illustrate, each in its own way, the desire and capacity of giving organic form to the generalized discontent, to the resistance, to rebellion and to a transforming impetus. Instead of paralysis and desperation, the national drama is generating lucid brave and organized reactions.

One more of those initiatives will take form today, upon a multifaceted commission of university students, activists and members of the National Indigenous Congress being in installed in Cuernavaca. It proposes contributing to dialogue and agreement among the diverse cultures that we are. Its members are convinced that there will be no justice, peace and security in the country while the social order is not constructed on diversity. It’s about giving concrete meaning and efficacy to the idea that the Zapatistas formulated 20 years ago: we must construct a world in which many world fit.

The current effervescence has already permeated all social layers and even reaches the most isolated corners of the country. Our demons were let loose a long time ago and created this unsupportable state of things in which we are submerged. Now, the forces that will be able to conquer them have been set in motion, by serenely advancing in the national reconstruction. The genie escaped from the bottle and it will not be possible to put it back in. Thus, the hope of giving full reality to our emancipation is nourished every day.