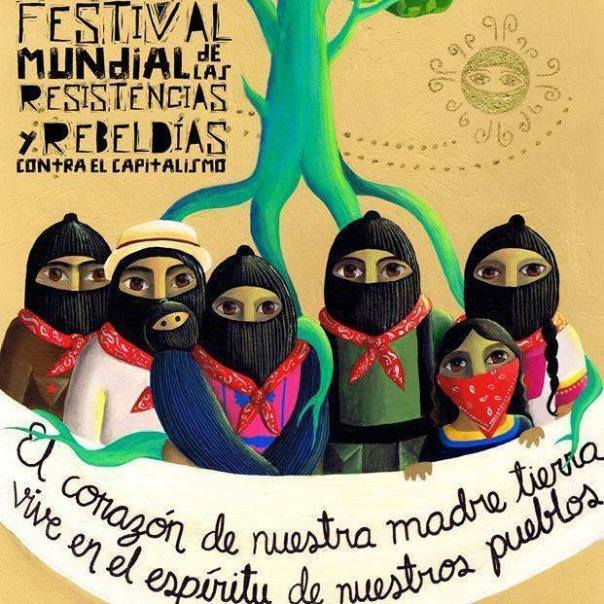 On the very next January 2 and 3, 2015 the Zapatista National Liberation Army (EZLN) and the Congreso National Indigenous Congress (CNI, its initials in Spanish) will hold the plenary of conclusions, agreements and pronouncements in Cideci, in San Cristóbal de las Casas, Chiapas, Mexico, results of the word expressed in the different exchanges (sharing) of the First Worldwide Festival of Resistances and Rebellions against Capitalism “What those above destroy those below reconstruct.”

The festival expresses the phase opened at the end of 2012. They have repeatedly announced the EZLN’s death as a project, as well as the indigenous cause, adducing that: “it already passed from fashion.” Such an absurdity was disproven on December 21, 2012, when Zapatismo held massive silent marches in various Chiapas municipios, emphasizing anew their entrance to San Cristóbal de las Casas. In them, the symbolic message was the question: “Did you hear it?” Early in 2013, the EZLN profiled two initiatives of re-articulation; the first was the Cátedra Tata Juan Chávez, convoked jointly with the National Indigenous Congress; the second: during August and December and also the first week in January 2014 the escuelita zapatista (Little Zapatista School) was held, which brought together thousands of national and foreign students in all the Caracoles to know directly from the Zapatista bases the extraordinary systemization of their autonomous organizational experience in the Good Government Juntas. The CNI held different regional meetings during the first half of this year, which culminated in the August Exchange, in which it was agreed to hold the festival that is about to conclude.

This same year, the EZLN suffered one of the most serious attacks that it has faced, just when it is promoting the re-articulation with the CNI and other movements. Last May 2, members of the Independent Central of Agricultural Workers and Campesinos Historic (Cioac-H, for its initials in Spanish) murdered José Luis Solís López, Galeano, a teacher at the escuelita zapatista. The brutality of the crime and the ambush were carried out in La Realidad, one of the emblematic bastions of Zapatismo. Within this context, Subcomandante Insurgente Marcos announced his disappearance and the birth of Subcomandante Galeano and, nevertheless indicated that the EZLN reaffirms its option for peace and not war, in favor of life and not death. With the noted process underway, last September 26 it received the blow of the disappearance of 43 normalistas from Ayotzinapa.

The caravans of the disappeared students relatives were received inside of Zapatista lands on November 15, 2014 and Subcomandante Insurgente Moisés expressed a profound message: “Your words are of utmost importance to us: your rage, your rebellion, your resistance. There, on the outside, they are talking and arguing and making allegations over violence or non-violence, ignoring the fact that there is violence on most people’s tables every day. Violence walks with them to work and to school, goes home with them, sleeps with them, and without consideration for age, race, gender, language, or culture, makes a nightmare out of their dreams and realities. We hear, see, and read that on the outside they are debating coups from the right or the left, who to take out of power and who to put in. They forget that the entire political system is rotten.

He also counseled them to avoid division, getting ready to face betrayal and abandonment when the specific cause is out of style and, above all, to look below, and from there, only from there, to weave your alliances. Seek the native peoples, he told them, who before time was time, possess the wisdom to resist and there is no one that knows more about pain and rage. And he warned: “We know that many ask things of you, that they urge you, that they demand of you, that they want to lead you toward one destiny or the other, that want to use you and that they want to tell you what to do.”

One month later: “We Zapatistas, are here. And from here we see, hear and read that the voice of the family members and the compañer@s of the murdered and disappeared of Ayotzinapa is starting to be forgotten and that now, for some folks out there, the more important things are:

-the words of others that have taken the stage;

-the discussion about what tactics and strategy to follow so that the movement will transcends its limits.

Therefore we say that what is first, most important and urgent is to listen to the family members and compañeros of the disappeared and murdered of Ayotzinapa. Those are the voices that have touched the hearts of millions of people in Mexico and in the world.” They then expressed their decision to “cede our place at the first Worldwide Festival of Resistances and Rebellions against Capitalism to the relatives and compañeros of the murdered and disappeared normalistas of Ayotzinapa.” In 1995 they also opened the table for dialogue with the government to all of the country’s indigenous peoples; those are authentic democratic lessons. This weaving of secure alliances will show hopeful strategies.