Movement for change coming from the Iguala case 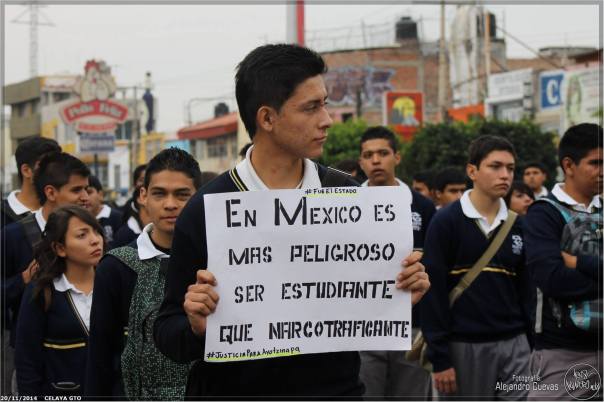 The sign the student is holding reads: In Mexico it’s more dangerous to be a student than a drug trafficker.

The five popular municipal committees that were installed yesterday in different Guerrero municipios, and another 20 more that are being prepared, are part of the people’s organized response, who beginning with the Iguala attack, were at a “point of no return, articulating a movement for changing things in this country, once and for all,” asserted Omar García, leader of the Student Committee of the Ayotzinapa Rural teachers college.

He described these new organizational experiences in Ayutla de los Libres, Tlapa, Acapulco, San Luis Acatlán and Tecoanapa as initiatives “that seek to exercise self-government and direct democracy through popular assemblies,” which seek to change the forms of government where an official municipal (county) structure dominates that administers public and private issues. “We want it to be the population that attends to those issues with a concept of population, of people, with all its difficulties and complexities, with their creativity.”

He points out that facing a reality recognized by researchers as that 70 percent of the country is under the influence of organized crime, these new forms of municipal government are “a necessity, and not only for Guerrero.”

It’s difficult to explain the structure, the functions established and the attributions of these councils: “They are an incipient experience. Their organization is complex, but the purpose is that it’s the people that organize them and participate in them.”

García, a survivor of the attack on Iguala, last September 26, insists on describing the country’s conjuncture as a “point of no return.” But in the definition of what can happen, “we as Ayotzinapa students or parents can’t do it alone, it must be an effort of everyone to articulate a national movement.”

Yesterday, organizations with years of work in different regions, appeared in Guerrero heading some of these Popular Council projects, like the Regional Coordinator of Community Authorities-Community Police, the Union of People and Organizations, the Guerreran Network of Human Rights Organisms, the Guerrero Popular Movement and the Front of Democratic Organizations of the State.

Questioned about whether these initiatives follow the model of the Zapatista Zones in Chiapas, the Good Government Juntas, he explains that these “are not a model, but definitely a referent. “And yes, we are also starting to talk about autonomy, because it is a necessity, besides being a right. Constitutional Article 39 established that sovereignty is in the people, not in the government.”

Somehow, the councils appear as a response to the announcement of a new package of initiatives of President Peña Nieto, which he presents to the Legislative Power today. The leader comments that what he calls “Peña Nieto’s 10 little points” are only “for strengthening the State, not for strengthening society, because the only thing that they love is money and it’s structures. The people have the right to change the government model that applies to them, if what there is doesn’t function. There are no eternal models.”

He is asked: “How is it possible that a 1917 Constitution continues governing us? We are now in another century, in another millennium. We need new forms of government more horizontal, less patriarchal, less macho, more plural and with direct participation, not just representative.”

The rupture with that traditional way is important, he considers, because “politics it not a question of a few. We are saying a resounding no to state politics, there is another type of politics that we can apply, the politics of below, that of the common and current people.”

–Is it the moment for a new constituent?

–What I can say is that it is a moment of no return. Just like there are ruptures between generations, in ways of thinking, there must be ruptures in social and power relations. It is an opportunity for reinventing forms of social organization. Any parent, any student can sum it up for you in a very simple way.

We want changes. No one wants what happened the 26th to happen again, what happened yesterday and the day before yesterday, with those decapitated. We don’t want the government to continue repressing. How to achieve it? We are into that. We have to attempt it, we have the right to attempt it.”