ACNUR WANTS MEXICO TO CONSIDER MINORS TRAVELING TO THE U.S. AS REFUGEES 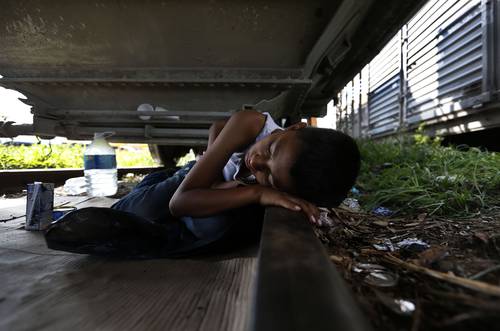 A Honduran child rests under the train, in Arriaga, Chiapas, waiting to board The Beast. Photo: Alfredo Domínguez

** They cannot be forcibly returned to their country if there is a risk: commissioner

** From January to June they have deported 8,239 without the knowledge of Comar: Francisco Sieber

The United Nations High Commissioner for Refugees (Acnur) mobilizes in Mexico to assure that the Mexican government guaranty the right to protection of those Central American children and adolescents, the majority Hondurans, who because of the risky conditions and violence that obliges them to emigrate towards the north, alone or accompanied, merit obtaining refugee status.

In an interview, the Acnur official for protection in Mexico, José Francisco Sieber, reported that in the last 18 months (2013-2014) the Mexican Commission for Aid to Refugees (Comar) recognized 56 minors as refugees.

It is barely a drop in the ocean. Last semester alone 11, 265 Central American children were “rescued” (according to the official lexicon) and processed by authorities migratory. Some 8 mil 239, were deported without passing through the Comar.

Faced with the high number of children deported, Sieber insists on “a fundamental point” of the international right of displaced children: “the right of not being forcibly returned to their place of origin if their life or their security is at risk.” Also, faced with the crisis of minors detained in United States border cities, the country has the same obligation as the region’s other states: protecting and giving refuge if their security is threatened in case of being repatriated.

In March of this year the Acnur office in the United States published a report on the new lines of displacement of the Central American population towards that country and the situation of the unaccompanied minors detained in border cities. Titled Niños en fuga (Children on the run), the report emphasizes the urgency of strengthening access to asylum and other forms of protection. A similar report with investigations of the United Nations officials about child migrants that cross through Mexico will be published soon.

In the stories collected in this field investigation, Sieber indicates, “we observe that there are more and more elements of violence in their narrative all the time; the children comment that there are situations of extortion, homicides, threats, attempts at recruitment into criminal groups, like gangs, and those are factors that caused their exit.”

That obliges the region’s governments to extend their protection practices. The challenge, in this case for the government of Mexico, which is the transit country, “is to identify the cases in which the minors effectively cannot return to their places of origin because they can confront risks to their security.” Those are the cases where the right to refuge must be applied.

“We are not saying that violence is the only reason for these rising flows. Reasons for migration are multiple. But we do say that violence appears with greater frequency in dialogues held by our officials with the children and, above all, with the adolescents, the majority coming from Honduras. We are hearing many and very diverse references to different forms of violence. That worries Acnur and makes us mobilize and work with the authorities to take measures that would permit responding to this situation.”

Challenge: distinguishing between migrants and refugees

–Given the circumstances in which the displaced are moving, how do you differentiate between those who emigrate because of economic causes, like poverty, and those who do it fleeing from violence?

–That’s why I speak of the challenge. There are situations where many of the children could have, as the best solution based on their best interest, family reunification in the country of origin. However, there could be others that no longer can return and that, therefore, should be considered refugees.

–Is it adequate to treat the petitions for refuge case-by-case when one is talking not about a migratory flow, but rather of a mass exodus? In the 1980s, with the mass arrival of Guatemalans that were fleeing from the war, the focus was not on individual asylum, but rather on refuge to entire communities. Would it not be applicable to the emergency that is experienced now?

–At the moment, what we see is that response mechanisms for the cases that seek international protection as refugees do exist. Another big challenge is that people know about these proceedings and they understand that they can access them. Not all of them have knowledge of the existence of an office like the Comar.

“The difference is that now not only do we have a legal framework of international refugee law, but also a Mexican law on refugees that is innovative in certain aspects like that of complementary protection.”

–Are these mechanisms sufficient to impede the Mexican State from deporting those who need protection?

–Exactly. And this is a fundamental point. There is a principle in international refugee law that protects them against any measure of forced return. If the person is recognized as a refugee, he or she is under the protection of this legal principle, and cannot be returned to their country of origin.

–We see in the Honduran press that in recent weeks there had been record numbers of children and women deported, after being detained in Mexico. Did these people have guarantees against forced return?

–What we see is that to the extent that a person does demonstrate to the Mexican authority the need for protection in the face of these situations of violence, of persecution, the person must automatically be channeled to the Comar. Effectively, we’re seeking that the people that are indeed at risk be listened to in a confidential manner within the context of an interview, and that they express the reasons for which they no longer want to return to their country of origin and to decide if this person is going to be considered as a refugee.

–Then what happened with these deportees of recent weeks, or that are being deported right now?

–As is known, Mexico is familiar with this migratory flow, which is not new. There is a situation where high numbers enter its territory for the purpose of reaching the United States. In two cases, migrants or refugees, they use the same ways. We must be careful because not all are refugees. Therefore, we insist on the challenge of identifying who is really a refugee.

–What is the situation in the United States, in the detention centers on its southern border, where there are still tens of thousands of children, some with their mothers, trapped in a legal proceeding? President Barack Obama has asked his Congress for discretionary ability to deport them. How does Acnur intervene in those cases?

–It is the same challenge: the identification of cases that do merit protection of the right to refuge. It’s the same for all countries. We’re talking about international refugee law. There are two other principles of international law: one is the prevalence, the observance of the superior interest of childhood, and the second is the right of the child, of the adolescent, to be consulted, to participate in the decision, to have their voice heard in the hearings and proceedings.