THE FAREWELL CEREMONY OF SUB MARCOS 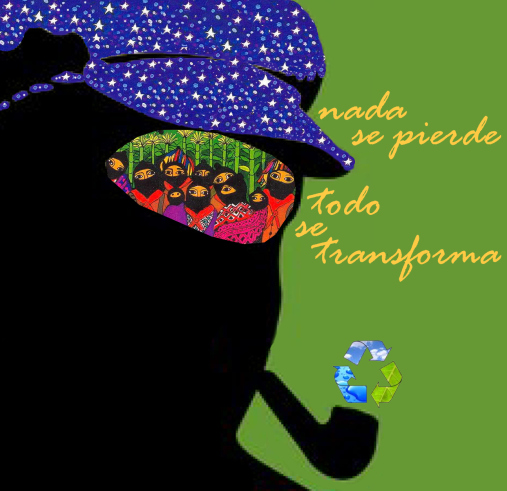 Nothing is lost. All is transformed.

The public reappearance and farewell of Subcomandante Marcos marks the end of an epoch in the Zapatista struggle. For a little more than 20 years the personage has been a central actor on the national public political scene. At once beloved and hated, admired and vilified, his passage through Mexican politics has provoked the most inflamed passions. Now, that participation comes to its end. Through his voice the EZLN will speak no more.

Throughout these two decades the rebel spokesperson has been the most recognized national political figure on the left outside the country. His writings have been translated into the most diverse languages. Some of the world’s most influential progressive intellectuals are adhered to the calls that Zapatismo has made. Every year, thousands of young people coming from the most diverse countries visit the communities in rebellion in Chiapas. Those who want another world that assume being Zapatistas are not just a few.

In the communiqué “Between Light and Shadow,” in which he announces his goodbye, Subcomandante Marcos affirms being a changing hologram and in a similar way, a buffoon, a distractor, a character. He was a creation that now comes to its end. His existence all these years –he tells us– was a big maneuver to give the project of life of the indigenous communities time to flourish.

We’re talking about a creation of the Indian peoples, about a project of autonomy that is neither electoral nor armed. A project which advances “in construction, still unfinished for sure, but already definite about what we are.” A project in which, “instead of dedicating ourselves to training guerrillas, soldiers and squadrons, we prepare promoters of education and health, and went building the basis of the autonomy that the world now marvels.” A project that renounces revolutionary vanguardism and substitutes for it mandar obedeciendo (to govern obeying); that promotes the construction of power from below, the abolition of professional politicians, the full participation of women and the celebration of difference.

Today, on the board of Zapatista politics there is a new game. “Between light and shadow” he remembers, as they announced in the days prior to publication of the Sixth Declaration of the Lacandón Jungle and the Other Campaign (Sexta declaración de la selva Lacandona y la otra campaña), which is still lacking what is missing, in other words, that the soccer game suspended because of an illegitimate goal against the Zapatistas is resumed.

The sports metaphor comes from the EZLN. In a letter directed to Massimo Moratti, president of the FC Internazionale de Milan, a little before the proclaiming of the Sexta, the rebels explained the significance of the “it lacks what’s missing,” in the “Postscript: P.S. in the tone and volume of a sports announcer – The Sup, using the tactics of the Uruguayan Obdulio Varela in the final against Brazil (World Cup, Maracanã Stadium, Rio de Janeiro, 7/16/1950), ball in hand, having traveled as if in slow motion (since May of 2001), from the Zapatista goalpost. After complaining to the referee about the illegitimacy of the goal, he puts the ball in the center of the field. He turns around to look at his compañeros and they exchange glances and silences. With the scorecard, the bets and the entire system against them, NO ONE has any hope for the Zapatistas. It starts to rain. A watch reads almost 6. Everything appears ready for the game to resume…”

That game that now resumes has Subcomandante Moisés –an indigenous commander– and a new generation of combatants at the front. Their route is that of the Sexta declaración (Sixth Declaration), which is considered “the most audacious and most Zapatista of the initiatives that we have launched as of now,” which has permitted meeting their current traveling compañeros. It is, well, a meeting that is going to dispute “below and to the left,” on the court of anti-capitalism and the radical critique of the political parties (and of the commercial communications media, which it disrespectfully defines as “for pay”).

The disappearance of the Marcos character–he tells us– is not the product either of his physical maladies or his death. The news that circulated about his grave afflictions and his death “were rumors encouraged because it was convenient that way.” His terminal illness was the “last big trick of the hologram.” In good time it may be like that, and that the personage behind the personage, he with the blue, green, brown, honey or black eyes, enjoys perfect health.

The trick was successful. It deceived us a lot. At least it generated restlessness; also weighing. Nevertheless, one must not belittle –at the risk of committing a great injustice– that the reaction of many people was one of great and genuine concern for the health of Marcos. Many prayed for his speedy recovery; there was no lack of impartial offerings of assistance. It would be wrong to underestimate that wave of solidarity.

The assassination of Juan Luis Solís, Galeano, cannot be seen at the margin of the aggressions against the social movement. It is a grave warning about what they want to do against the Zapatistas. The government divided the community police of Guerrero, incarcerated several of its leaders and threatens to disarm them. In Michoacán, it domesticated and fragmented the autodefensas, and threatened to incarcerate their dissident leaders. Why is the State going to permit the EZLN to maintain its autonomous project and continue armed?

The massive and energetic mournful mobilization of the rebels this weekend is not only an expression of their rage, pain and longing for justice, but also a preventive response to the temptation de Los Pinos (the presidential palace) of recuperating en Chiapas authority that it considers exclusive. It is a warning of what the State would confront if it continues on the route of confrontation.

The public disappearance of Subcomandante Marcos, his ritual death and his transformation into Subcomandante Galeano, are a moving homage to his compañero, assassinated by paramilitaries of the CIOAC-H as part of the State’s war against Zapatismo and the Indian peoples. Faced with a left that has shamefully condemned its dead and disappeared to oblivion, the rebels scoff at death making the memory of the dead live. Like all true farewell ceremonies, it is also a commitment for life.

← Xi’ Nich distances itself from conflict in the Lacandón Community Zone
SCI Moisés: A Meeting in La Realidad a few days ago →