Posted on May 26, 2014 by Chiapas Support Committee 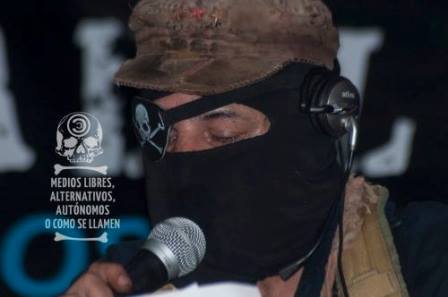 The Sup in La Realidad wearing the black eye patch with a pirate skull design on it.

At 2:08 AM this morning, Subcomandante Marcos announced that starting at that moment he ceases to exist. In a press conference before the free media that attended the homage to Galeano, the Zapatista assassinated in the Zapatista com munity of La Realidad, the military chief of the Zapatista National Liberation Army (Ejército Zapatista de Liberación Nacional, EZLN), indicated: “if you permit me to define Marcos, the personage, then I would tell you without hesitating that it was a motley one.”

After more than 20 years at the front of the political-military organization that rose up in arms on January 1, 1994, Marcos announced his relief. He indicated that after the Zapatista Escuelita courses last year and the beginning of this year, “we realized that now there was a generation that could follow the example, that could listen to us and talk to us without waiting for a guide or leadership, or seeking submission or follow-up.” Then, he said, “Marcos, the personage, was no longer necessary. The new stage in the Zapatista struggle was ready.”

In the emblematic community of La Realidad, the same one in which last May 2 a group of paramilitaries from the Independent Central of Agricultural Workers and Campesinos Historic (CIOAC-H), assassinated the Zapatista support base Galeano, Subcomandante Marcos appeared in the wee hours of the morning before representatives of the free communications media, accompanied by six comandantes and comandantas of the Comité Clandestino Revolucionario Indígena and Subcomandante Insurgente Moisés, to whom last December he announced as his elevation to the command.

“It is our conviction and our practice that to reveal oneself and struggle neither leaders nor caudillos, messiahs or saviors are necessary. To struggle one only needs a little bit of shame, and a whole lot of dignity and much organization, the rest or is useful or not to the collective,” said Marcos.

With a black patch with the design of a pirate skull covering his right eye, the Zapatista spokesperson up to now remembered the early morning of January 1, 1994, when “an army of giants, in other words, of indigenous rebels, went down to the cities to shake up the world with their step. Barely a few days later, with the blood of our fallen still fresh in the streets, we realized that those from afar did not see us. Accustomed a looking on the indigenous from above, they do not lift their view to look at us; accustomed to seeing us humiliated, their heart did not comprehend our dignified rebelliousness. Their view had been stopped at the only mestizo that they saw with a ski mask, in other words, they didn’t look. Our chiefs then said: ‘they only see how small they are, let’s make someone as small as them, so that they see him and so that they see us through him.’”

That was the birth of Marcos, fruit of “a complex maneuver of distraction, a terrible and marvelous magic trick, a malicious prank of the indigenous heart that we are; the indigenous wisdom challenged modernity in one of its bastions: the communications media.”

The note about the conference, signed by the “free, alternative, autonomous media or however you say it,” announced in diverse portals of alternative communication like Radio Pozol, Promedios and Reporting on Resistances, recreates an atmosphere of applause and vivas to the EZLN after the Commanders’ announcement.

The figure of Subcomandante Marcos strolled in to the world from the first hours of January 1, 1994. The image of an armed man with red cheeks and an R-15, and decked out in a tan and black uniform covered by a wool chuj (vest) from Los Altos of Chiapas, face covered with a ski mask and smoking a pipe, was the front page of the most influential newspapers on the planet. In the days and weeks afterwards his comunicados charged with irony and humor, defiant and irreverent came to be known. Some white pages written on a writing machine and were literally snatched up by the national and international press. Twenty years and more than four months later, Marcos announces the end of this stage.

“It’s hard to believe that twenty years later that ´nothing for us´ it would turn out not to be a slogan, a good phrase for signs and songs, but a reality, La Realidad,” said Marcos. And he added: “if being consequent is a failure, then incongruence is the path of success, the route of power. But we do not want to go there, it does not interest us. Within these parameters, we prefer to fail than to triumph.”

“We think,” he said, “that it’s necessary that one of us dies in order that Galeano Lives. Thus we have decided that Marcos must die today.”

Faithful to his ironic style and to his traditional postscripts, the personage of Marcos ended: P.D. 1 Game Over. 2. – Check Mate. 3. – Touché. 4. – Mhhh, Is Hell like this? 5. – In other words, can I now walk around naked without the motley clothes? 6. – It’s very dark around here, I need a little light…”

[A new communiqué follows this Desinformemonos article. It is called Entre La Luz y La Sombra. In the communiqué the figure of Marcos dies and becomes Subcomandante Insurgente Galeano so that Galeano lives. It’s very long. The English translation is out. You can read it here. You can read it in Spanish here. ]

Originally Published in Spanish by Desinformemonos.org

← Subcomandante Marcos at Homage to Galeano
Gustavo Esteva: La Realidad is ours →