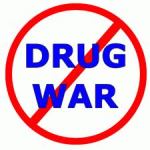 It is essential that we understand the United States Drug War policy for exactly what it is: a tool for social control and repression. In the United States, the Drug War has been used against people of color, migrants, legal immigrants and activists. It is now a large contributor to the overcrowding of criminal courts, local jails and the flourishing prison-industrial complex, at a cost to the taxpayer of billions of dollars. It has also been used to pressure Latin American governments and support deadly “Drug Wars” in Colombia and, currently, in Mexico, the latter of which is spilling over into Central America. Consequently, many of us have reason for wanting to end this repressive policy. This is written with the hope that we can get together and find ways to end it.

As a member of a Zapatista solidarity group, my focus is on Mexico. I am alarmed at what’s happening in Mexico as a result of the US-backed “Drug War.” Each day I read the Mexican online media closely for news about the Zapatistas, Sexta adherents and social movements (those from below). While doing so, I am hit over the head with the daily horror that is called a Drug War and its underreporting in the United States.

Perhaps the most frustrating thing about following news about the so-called “Drug War” in Mexico is obtaining accurate information on the approximate number of deaths that have resulted from it. The Mexican president and his cabinet officials want to hide or minimize the violence, so they do not publicize accurate numbers of dead. In the United States, the Obama administration, like the Bush administration, seems to be head over heels in love with the Drug War (they say it’s a “security” issue), but they also want to hide its horrors. Consequently, misinformation abounds! Journalists, especially in the US, tend to simply repeat what someone else has written without any explanation of how the numbers were calculated.

Molly Molloy shares this frustration. Molloy is a research librarian and Border and Latin American specialist at the New Mexico State University Library in Las Cruces, NM. She is the creator and editor of the Frontera List, a forum for news and discussion of border issues. Since 2008 she has provided detailed documentation of homicides in Mexico, with an emphasis on Ciudad Juarez. She translated and co-edited El Sicario: The Autobiography of a Mexican Assassin (Nation Books, 2011) and has written for The Nation, Phoenix New Times, Narco News and other publications.

One of the many examples of media misinformation about Mexico’s “Drug War” comes from none other than the Council on Foreign Relations, which published a February 13, 2013 video using the number of 50, 000 deaths without saying how it arrived at that number. [1] Just a few months prior to that, Molloy was reporting 110, 000 deaths! [2] Underreporting Mexico’s drug war death toll minimizes the urgency of the situation and does a disservice to the unreported victims!

While acknowledging that a precise number is impossible to calculate, there are official statistics and news reports available that provide guidance. Molloy spells out her sources and methodology in a recent article published in the online Small Wars Journal. Entitled The Mexican Undead: Toward a New History of the “Drug War” Killing Fields, [3] the article begins, in part, with the following words:

“Power in Mexico works as a system of arrangements between government, business and narco-trafficking. The drug business has functioned pretty well for decades, generating huge sums of money and funneling it into government and legitimate businesses. Violence was always part of its corporate culture as there is no way to enforce contracts in the drug business without murder. For years this level of violence seemed acceptable to those in power. Starting in December 2006, President Calderón deployed the army, and lethal violence in Mexico exploded. He said he was fighting drug trafficking, but the flow of drugs and money continues unimpeded. In 2010, Calderón said it was not exactly a war on drugs, but rather a crusade for public safety. There is evidence of social cleansing aimed at those deemed worthless to society: los malandros. At least 130, 000 Mexicans have been killed and kidnapping, extortion and murder plague civil society at all socio-economic levels.” [Emphasis added.]

Molloy explains her methodology in that article. It includes using figures on intentional homicides from INEGI, Mexico’s National Institute of Statistics and Geography. She also looks at statistics reported by the National System of Public Security. In order to separate out intentional homicides due to domestic violence, armed robberies or land disputes from those committed as a result of the Drug War, statistics from the years prior to the Drug War are compared to those after the Drug War began. Molloy cites a result similar to hers from the Trans-Border Institute (TBI), University of San Diego. [4] The TBI report states: “ … our estimate is that the total number of homicides during the Calderón administration was likely around 120,000 to 125,000 people killed, depending on whether the INEGI data or the National System of Public Security data are used.”

Molloy’s article also addresses other Drug War-related issues; such as, forced disappearances, death squads, torture, the collusion between government and organized crime, and the impunity with which these crimes take place. She publishes the government’s official number of those forcibly disappeared, which is placed at approximately 27,000, and also gives examples of death squads, torture, the government’s collusion with organized crime and the near total impunity of the perpetrators. And, she wonders why none of this is accurately reported in the US media, citing many examples of under-reporting. Although Molloy does not address the issue of the tens of thousands of Mexicans displaced from their homes and communities by the violence, she does introduce the issue of what she calls “social cleansing” through several examples from the Juárez area. Those being “cleansed” are often the folks she terms “los malandros,” which very loosely could be translated into “the riffraff,” or in Zapatista-speak: those from below (los de abajo).

How the Zapatistas see the war

In a March 2011 letter exchange between Subcomandante Marcos of the EZLN and the Mexican philosopher Luis Villoro, [5] Marcos discusses war in general. He says the bottom line of any war is control of territory!  Marcos reviews a history of wars and says that nuclear weapons have changed the nature of wars from the World Wars in the first half of the 20th Century to regional or smaller wars, whereby a stronger force dominates a weaker one and the communications media legitimize the rational for the domination.

In reference to the current war in Mexico (“The war from above”), domination is the imposition of capitalism’s will. “In the current era, the will that capitalism attempts to impose is to destroy/depopulate and reconstruct/reorder the conquered territory.”

“Yes, war today is not content to conquer a territory and demand tribute from the defeated force. In the current era of capitalism it is necessary to destroy the conquered territory and depopulate it, that is, destroy its social fabric. I am speaking here of the annihilation of everything that gives cohesion to a society.” Marcos believes that the United States is the one that will benefit from the Drug War because Mexico’s social fabric will be destroyed.

What we are witnessing is not really a war on drugs; it is the militarization of Mexico in order to clear the way for transnational capital to accumulate wealth via mining, mono-crop agriculture and real estate development, all of which involve the displacement of people. Thus, it is a war against people. As Marcos points out: “We have said before that war is inherent to capitalism and that the struggle for peace is anticapitalist.”

The thought of the US government supporting a war that is killing approximately 130,000 people in a neighboring country with which we share a 2,000-mile border, forcibly disappearing at least 27,000 (they are all presumed dead), and displacing tens of thousands, perhaps hundreds of thousands, offends my sense of social justice, as does the mass incarceration of people of color in the United States. Underreporting hides the human tragedy caused by this deadly war. Ya basta! (Enough!) It is my hope that the groups, collectives and organizations that represent people affected by this repressive policy can work together to end it both at home and abroad and that we can all use numbers that truly represent the tragedy both here at home and in Latin America, where Mexico is the largest current victim.

4. The Justice in Mexico Project Releases its Report “Drug Violence in Mexico: Data and Analysis Through 2012,” February 5, 2013. http://justiceinmexico.org/2013/02/05/the-justice-in-mexico-project-releases-its-report-drug-violence-in-mexico-data-and-analysis-through-2012/