IN HONOR of JUAN CHAVEZ 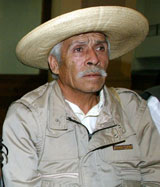 On March 28, 2001, Juan Chávez Alonso, Don Juan to his brothers and compañeros, addressed the Mexican Congress along with the Zapatista commanders and two other indigenous delegates. Wearing a hat, his trusty jacket, Purépecha coat and work boots, he addressed the lawmakers in his wise, serene, slow and steady voice.

The deputies and senators gathered that day in San Lázaro looked as if they were listening, but they heard nothing. Days later, they agreed to a constitutional reform on indigenous rights and culture that breached the agreements reached between the Zapatistas and the federal government in February 1996.

For Don Juan, the breaching of the Accords of San Andrés was a betrayal of the Indian peoples by the Mexican State.  Again.  A similar disloyalty was the amendment of Article 27 of the Constitution, with which they opened up to the market land which was communal social property.

Don Juan was, until his death, on June 2, an older brother in the National Indigenous Congress (CNI), the most inclusive and representative Indian organization in the country. He was one of the most important moral authorities of the national indigenous movement; he spoke on their behalf in various forums and conferences, touring the country and travelling abroad.

Born in Nurío community in Michoacan, 71 years ago, married and the father of seven children, an agricultural technician, farmer and indigenous education specialist, he researched and reflected on his people, the Purepecha nation. He was a wise man. He spoke fluently and articulately in Spanish and purhé. He was always willing to listen and explain with great patience what was asked.

With his feet in the roots of his community and his gaze on the Zapatista horizon, Don Juan was a  powerful cultural translator between two worlds. Listening to him was an event. Both a community representative and a national leader, his talks were true dramatic experiences in which, when referring to the indigenous world, he was speaking at the same time of the history of the original peoples and of Mexico, while he made linguistic reflections, analysed legal concepts, deciphered the destruction of the environment by capitalist barbarism, explained agricultural issues and gave sharp moral judgments.

His lectures were a unique blend of personal experiences, the recovery of the unwritten history of the Indian peoples, and an analysis of the relations of class exploitation and ethnic oppression. Musician and poet, his speeches seemed at times to be the work of a lay preacher, a celebration of the word.

When, in September 2003 in Cancun, Korean farmer Lee Kyung Hae set fire to himself in protest against the destruction of campesino agriculture by the World Trade Organization, the CNI organized an emotional funeral.  They put two photos of Mr Lee in the auditorium, in which he was smiling, neatly dressed in a suit and tie, no sign of his despair. A cross of melted paraffin and burning candles, decorated with red rose petals, took the shape of his body. A rectangle of flowers and another of candles framed the altar. Three bowls of copal topped and scented the sacred icon with which they paid him tribute. Juan Chavez was one of two notable Indian who officiated at the ceremony. With a seniority and a solemnity which would have been the envy of the most able ministers of religion, the Purépecha prepared the way for the earth and the natural world to welcome the martyr.

Don Juan had direct experience of being a migrant worker on the other side of the border. “With no way out, we are going, boys, children, grandchildren – he said – : from the age of 13 or 14 they are going to cross the international line. They go to death there in the desert, to the abuse of the Immigration Service of the United States. The young boys are going because there is no way out. And with their departure, their families and communities disintegrate. There is ethnocide, the cultural death of the people and the devastation of natural resources.”

Relentless critic of governments of all colours, he received threats, reprisals and attempted bribery.  He was never daunted. “They, the governments – he asserted – have always tended to be those who took from the indigenous communities across Mexico and who gave to the chiefs, the rich and the powerful. Governments are directly responsible for the creation of conflicts between peoples, and are those who have historically taken the land from the Indians to give to the profiteers, to the ejidatarios who had no roots in the land and sold or rented it to large businesses and plunderers of this country.”

Zapatista until the last second of his life, Don Juan emphasised, again and again, the close relationship between the rebels in south-east Mexico and the national indigenous movement. “The EZLN and the CNI are now – he explained – a single national force. The armed word which has been heard since January 94 has been accepted, defended and respected by us, because, historically the supreme right of the people is to rebellion. The EZLN flies today the demands that for centuries our people have been denied by governments. The CNI made these demands their own…”

Tireless sower of another future, Don Juan proposed: “Let us dream together and give birth to the seed of hope, because this is the time of the indigenous peoples, of democracy, freedom and justice”. With his death, the country has lost one of its greatest men: a man who worked as few have done to make possible the arrival of the hour of the Indian peoples.

English translation by the UK Zapatista Solidarity Network  for the:

International Zapatista Translation Service, a collaboration of the:

← ZAPATISTA NEWS SUMMARY for MAY 2012
Commodification of Nature in Chiapas →